The cryptocurrency fell as much as eight percent on Thursday on the Luxembourg-based Bitstamp exchange to hit $9,000 exactly, marking a fall of well over $2,000 in under 24 hours.

Bitcoin slid to as low as $9,000 in volatile trade on Thursday, having lost more than a fifth of its value since hitting an all-time high of $11,395 on Wednesday..

The cryptocurrency fell as much as eight percent on Thursday on the Luxembourg-based Bitstamp exchange to hit $9,000 exactly, marking a fall of well over $2,000 in under 24 hours. It then edged back up to trade at around $9,400 in the hour that followed, still down roughly four percent on the day.

One market-watcher attributed the fall to outages in bitcoin exchanges and the heavy price surge of recent times.

"Naturally a few of the early bitcoin traders are taking some profits off the table," said Charles Hayter," founder of CryptoCompare.com.

"Volatility is in the market at the moment and that means both positive and negative moves."

The latest fall has tempered an astronomical rise for the cryptocurrency in recent months – Bitcoin was up almost 1,100 percent year-to-date on Wednesday. As of 1500 GMT on Thursday, it was still up around 880 percent.

The rise has been fuelled by signs that the digital currency is slowly gaining traction in the mainstream investment world, as well as by increasing awareness.

In the past week, Google searches for Bitcoin exceeded searches for "Trump" for the first time, data from Google showed, even though US President Donald Trump has been prominently in the news this week.

Several large market exchanges including Nasdaq, CBOE Holdings and CME Group – the world's largest derivatives exchange – have said they are planning to provide futures contracts based on Bitcoin.

Some investors have said such a development may prompt them to add the digital currency to their portfolio.

In October, Goldman Sachs chief executive Lloyd Blankfein said he was keeping an open mind on Bitcoin following a media that the investment bank was exploring a new trading operation dedicated to cryptocurrencies.

Bitcoin's rapid ascent has prompted warnings from a stream of prominent investors that it had reached bubble territory, while the Bank of England deputy governor on Wednesday said investors should "do their homework" before investing in the digital currency.

New users of Bitcoin have skyrocketed in recent weeks, along with the cryptocurrency's own rise.

London-based Blockchain.info, one of the biggest global Bitcoin wallet-providers, told Reuters on Wednesday it had added a record number of new users on Tuesday, with more than 100,000 customers signing up, taking the total number to more than 19 million.

The evidence suggests that few of the users are buying Bitcoin to use it as a means of exchange, but are speculating to increase their capital.

Bitcoin's fall on Thursday dragged down the prices of other cryptocurrencies in its wake, with Ethereum, Bitcoin's biggest rival, falling as much as 19 percent on the day, according to trade website Coinmarketcap.

For the month, Bitcoin is still on track for a more than 40 percent price increase. 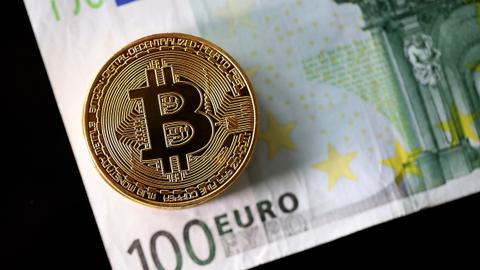