The boat, which was carrying around 50 people, took on water near the island of Paxi during an apparent attempt to reach Italy.

At least 12 people died on Saturday when a boat loaded with asylum-seekers sank in the Ionian Sea, the Greek coastguard said.

"So far 12 bodies have been recovered. The search and rescue operation continues," they said in a statement, adding that they had rescued more than 20 survivors.

"Three of them are being flown by helicopter to (the nearest hospital) for emergency treatment," the statement added.

There were no immediate details on the identity of those on board.

The boat, which was carrying around 50 people, took on water near the island of Paxi during an apparent attempt to reach Italy.

At this point someone on board issued a distress call, the authorities said.

Thousands of migrants and refugees have died in recent years while attempting to cross the Mediterranean Sea in small, overloaded boats.

With Greece's northern borders closed to migrants seeking to reach western Europe, some are trying clandestine routes to quit the country, such as mountain routes into Albania or by sailing to neighbouring Italy.

Twenty-two people have died or are still missing in migrant boat sinkings in the Mediterranean just this month, according to the International Organization for Migration.

Another 73 persons were rescued in separate incidents in the Aegean between Friday and Saturday, the Greek coastguard added.

Greece in 2019 again became the main entry into Europe for migrants and refugees. The UN refugee agency recorded more than 55,000 arrivals by sea and more than 14,000 via the land border with Turkey.

Greece's new conservative government has struggled to manage hundreds of new asylum-seeker arrivals on a daily basis from the coast of neighbouring Turkey.

Greece's migrant camps are mostly full beyond capacity. In response, the government has tightened asylum provisions as well as announcing plans to bolster border patrols and build larger, closed camp facilities to detain thousands of migrants before deporting them back to Turkey. 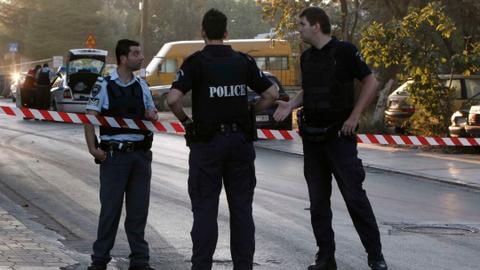