Since Brexit, Northern Ireland supermarkets have seen food shortages, with problems stemming from Britain’s withdrawal terms that leave the province in EU’s single market, requiring checks on goods arriving from other parts of UK.

The meeting will take place a month after the EU started legal action against the United Kingdom, arguing the former member did not respect the conditions of the Brexit withdrawal agreement and violated international law.

EU Commission spokesperson Daniel Ferrie said on Wednesday Sefcovic and Frost will have an informal meeting to “take stock of ongoing technical work" and “to provide a political steer for both teams on outstanding issues."

Since leaving the EU's single market at the end of last year, supermarkets in Northern Ireland have seen some shortages of food, and the British government has also delayed introducing checks on parcels and pets.

The difficulties stem from the terms of Britain's withdrawal agreement, which leaves Northern Ireland in the EU single market for goods and so requires checks on goods arriving there from other parts of the United Kingdom.

UK to respond to EU legal action by mid-May

Meanwhile, Britain has agreed with the EU that it will respond to the bloc's legal action over new trading rules by mid-May, a spokesperson for the government said.

Britain has denied that the new rules undermine the part of the Brexit deal that governs trade to the British province, saying it extended the grace period for checks on goods moving to Northern Ireland to ease their passage.

"In line with precedent that typically allows two months to respond to proceedings of this kind, we have agreed with the EU that we will respond to the Letter of Formal Notice by mid-May," the spokesperson said.

"We've been clear that the measures we have taken are lawful and part of a progressive and good faith implementation of the Northern Ireland Protocol."

Both sides are trying to find an agreement on trade rules in Northern Ireland amid rising tensions in the small territory where Britain’s exit from the European Union has unsettled an uneasy political balance.

Earlier this month, Protestant and Catholic youths in Belfast hurled bricks, fireworks and gasoline bombs at police and each other during a week of violence.

In March, the UK decided to unilaterally extend a grace period until October on checks for goods moving between Britain and Northern Ireland, a decision that led the EU to issue a formal notice to its former member. The UK had been given one month to respond. 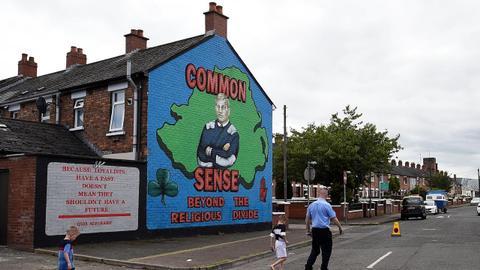 Woman killed after shots fired during rioting in Northern Ireland