The US, Germany and France have condemned Moscow's detention of Navalny and a crackdown on his supporters.

Russian police have detained more than 5,300 people across the country in a massive clampdown on anti-Kremlin protests, as prosecutors backed a request to imprison opposition leader Alexey Navalny.

OVD Info, which monitors arrests at opposition protests, said on Monday more than 5,300 people had been detained, including nearly 1,800 people in Moscow and almost 1,200 in Saint Petersburg, Russia's second city.

The protests that witnessed a rare lockdown of Moscow centre came ahead of Navalny's court hearing which could see him imprisoned for several years.

Meanwhile, a Moscow court ordered the Navalny's wife to pay a fine of 20,000 rubles ($265) for violating protest regulations after she attended a demonstration in the Russian capital to demand his release on Sunday.

Russian police break up anti-government rallies across the country and arrest more than 4,000 people pic.twitter.com/lRpLvh4IUY

US Secretary of State Antony Blinken has sharply criticised Russia over its crackdown on Navalny supporters and said the United States was reviewing possible responses to Moscow's actions.

Blinken told NBC News he was "deeply disturbed by the violent crackdown" on Russian protesters on Sunday.

"The Russian government makes a big mistake if it believes that this is about us," Blinken said in the interview.

Blinken did not commit to specific sanctions against Moscow in the interview, taped on Sunday.

France has urged Germany to scrap a major gas pipeline project with Russia in protest over Navanly's detention.

"We have always said we have the greatest doubts on this project in this context," European Affairs minister Clement Beaune told France Inter radio.

Asked specifically if France wanted Berlin to drop the project, Beaune said: "Indeed, we have already said this."

The United States as well as several European countries such as Poland have criticised the Nordstream II project, saying it will increase German and EU dependence on Russia for critical gas supplies.

The German government has condemned violence against demonstrators in Russia.

A government spokeswoman said at a regular news conference the protesters and Navalny must be released.

The 44-year-old opposition figure is facing charges of violating the terms of a 2014 suspended sentence and could be jailed for two-and-a-half years.

On Monday, the General Prosecutor's Office said in a statement it backed a request by the prison service to change Navalny's suspended sentence to a real one.

"This motion is considered lawful and justified," the statement said.

Navalny was detained at a Moscow airport in mid-January after flying back to Russia from Germany where he was recovering from an August poisoning with nerve agent novichok he blames on the Kremlin.

The anti-corruption campaigner is being held in a high-security detention centre and faces years of potential jail time in several different criminal cases, despite calls from Western governments for his release.

Navalny's team has urged supporters to gather in front of Moscow's Simonovsky district court in a show of support for the opposition politician on Tuesday. 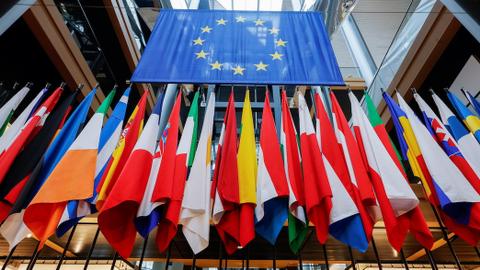