UK may grant diplomatic protection to jailed Briton in Iran

Iranian-British aid worker Nazanin Zaghari-Ratcliffe was sentenced to five years after being convicted by an Iranian court of plotting to overthrow the clerical establishment.

The UK is considering granting diplomatic protection to a British-Iranian Nazanin Zaghari-Ratcliffe, a project manager with the Thomson Reuters Foundation, arrested in Iran during a visit to the country in April 2016.

She is now serving a five-year jail sentence for alleged sedition, and has been threatened with further charges and a new trial that could double her sentence.

Johnson said on Nov. 1 that she had been teaching people journalism before her arrest in April 2016, contradicting her and her employer, who said she had been on holiday visiting her family.

"Of course I apologise for the distress, for the suffering that has been caused by the impression I gave that I believed she was there in a professional capacity. She was there on holiday," Johnson told parliament.

"I do apologise. Of course I retract any suggestion she was there in a professional capacity."

Opposition British lawmakers had said the remarks could land the aid worker a longer term in jail.

Johnson, whose job has come under pressure over the case, said he would meet Zaghari-Ratcliffe's husband this week, adding that the issue was casting a shadow over relations with Iran.

"I shall travel to Iran myself later this year to review the full state of our bilateral relations and to drive home the strength of feeling in this House and in the country at large," Johnson said.

Her husband, Richard Ratcliffe said that uncertainty had affected his wife's health and she had gone to hospital for tests after finding lumps on her breasts, which the specialist thought were benign and stress-related. 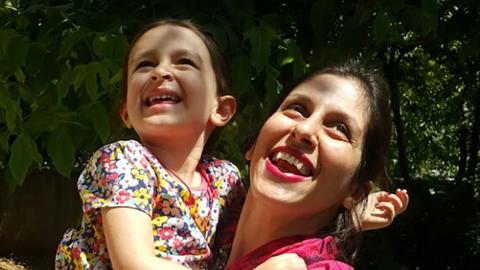