More than a million Muslim-majority Rohingyas live in camps in Bangladesh with the majority arriving in August 2017 after fleeing genocide by Buddhist fundamentalists in Myanmar.

Three years have passed since genocide sent hundreds of thousands of Rohingyas in Myanmar fleeing for their lives, the majority into neighbouring Bangladesh.

While the majority-Muslim people have long been discriminated against and persecuted by Myanmar’s Buddhist regime, in August 2017, the country’s army and allied vigilante militias turned up the ante, slaughtering villagers and raping women and children from the community.

Estimates put the number of Rohingya who have been killed by Buddhist extremists in Myanmar since August 2017, at more than 24,000.

UN officials have described their plight as a “textbook example of ethnic cleansing” that has been carried out with clear “genocidal intent”. Prosecutors at the International Criminal Court (ICC) have also opened a case looking into the abuses carried out by authorities in Rangoon.

Bangladesh is hosting around 1.1 million Rohingya refugees with about three quarters of those fleeing to the country in or after August 2017.

The conditions in the camps are torrid with those living in them not allowed to work outside the sites and exploitation of the vulnerable rampant.

Rohingya refugees have long complained that their children have been stolen from them and daughters trafficked into the sex trade.

Yet despite this mass suffering, very little has been done to redress the situation the Rohingya have found themselves in or to punish those responsible for their plight.

One reason for the lack of unified action by the international community on the Rohingya plight is the support Myanmar enjoys from a number of powerful states.

Both China and Russia, which are veto-carrying permanent members of the UN Security Council, have backed Myanmar and made sure measures targeting the country are blocked or slowed down.

In 2018, Beijing failed in its bid to strip funding for investigators looking into the reports of abuses by the Myanmar regime targeting the Rohingya.

The evidence collected by the officials is due to be preserved in the case of trials of those responsible for the genocide.

Chinese and Russian opposition means that the UN cannot pass binding resolutions against Myanmar for its treatment of the Rohingya.

Despite the abuses, the Burmese regime also continues to receive practical military help from countries, such as; China, North Korea, India, Israel, the Philippines, Russia and Ukraine.

These states have provided equipment and weaponry, including; fighter planes, armoured fighting vehicles, warships, and missiles.

For states like China, which has a 1,500km border with Myanmar, there are commercial and security benefits gained by protecting the Myanmar regime from international rebuke.

Beijing has plans to develop a port at Kyaukphyu, as well as develop road and rail infrastructure in the country. Broad sanctions against Myanmar, would therefore jeopardise the future of its own projects.

For other countries, such as India, the response to the Rohingya crisis is more rooted in ideology.

The far-right BJP government in New Delhi, shares the same language of ‘Muslim infiltration’ as its Burmese counterparts, and has therefore not acted against Myanmar in any significant way.

In fact, those few Rohingya who do make it to India face lack of recognition of their refugee status, as well as the threat of deportation back to Myanmar, where they face the very dangers they fled.

What do the Rohingya want?

For the hundreds of thousands of Rohingya living in involuntary diaspora, the dream of returning to their homeland is their number one priority.

But those in exile recognise that that aim will not be possible without support from the international community.

Those in the camps in Bangladesh and other countries require assurances that they will not be targeted by the discriminatory measures they have faced in the past and that they will have their citizenship restored to them so they can partake as equal members of Burmese society.

In the absence of international pressure, the Myanmar regime is not willing to meet those conditions and the Rohingya’s plight continues.

“The Rohingya simply want to return to their ancestral land where they have a place to call home, where they could raise their children like their forefathers with equality and dignity,” said Mohammed Rafique, media secretary for the European Rohingya Council to Anadolu Agency. 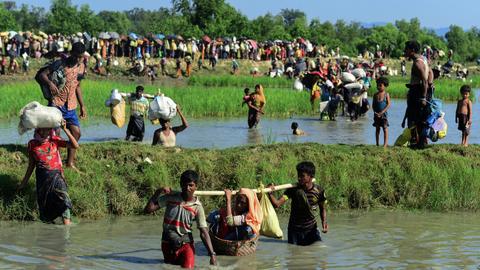