Why does Aguila Saleh want to move Libya's capital from Tripoli to Sirte?

The pro-Haftar politician, Aguila Saleh, has proposed a change in capital. However, critics see this as yet another obstacle towards peace.

Last week, delegates from Libya’s warring factions selected four leaders in a UN-hosted process to guide the North African country through to national elections in December 2021. That was seen as a major step towards unifying a nation with two separate, competing, governments in the east and west.

Recently, the speaker of the Libyan House of Representatives in Tobruk, Aguila Saleh, called for a consultation session in the eastern city to discuss granting confidence to the national unity government that would be formed in a few days by the interim prime minister, Abdul-Hamid Dbeibah.

In a move that raised eyebrows, Saleh also said the new Presidential Council and government should be based in Sirte and work under the protection of the armed forces (belonging to warlord Khalifa Haftar) and under the supervision of the Libyan 5+5 Joint Military Commission.

So why is Saleh making this proposal?

“Tripoli is the capital of Libya. Changing the capital can only be done by the people of Libya through due process, not by any country, and not by a handful of politicians. Just like in any other country,” he added.

In the eyes of Sewehli, Aguila Saleh is a spoiler who has overseen the demise of the Libyan parliament, the assassination of a female member of parliament who opposed him, and who authorised and supported the war on Tripoli.

“It is shameful and unacceptable for the international community to deal with him in any way except as a war criminal who should be behind bars. Definitely not a politician who is interested in peace and stability,” Sewehli told TRT World.

Countries like France, Russia, Egypt and the UAE have all contributed either military or diplomatic support to Khalifa Haftar before, during, and after their repeated assaults on the UN-recognised government in Tripoli.

“These same soldiers were responsible for shelling Tripoli for a whole year and laying thousands of mines in and around the Libyan cities of Tripoli and Sirte,” he said.

Sewehli sees the international community’s fingerprints all over this move, “I expect he has been schooled by France, Egypt and Russia, on making such statements.”

The 74 delegates of the Libyan Political Dialogue Forum (LPDF), under the supervision of the United Nations (UN), chose a list of candidates aimed at striking a balance between regional powers and various political and economic interests.

On Saturday, the eastern Libya-based regime, which allied with warlord Khalifa Haftar, conditioned the transfer of power to the new executive authority on the approval of the Tobruk-based parliament.

"We will wait for a final say from members of the House of Representatives (parliament) to hand over power to any governing body elected by law,” the unrecognised regime of Abdullah al Thani said in a statement.

“The government is ready to hand over power if the new authority is approved by the Tobruk-based parliament,” the statement read.

The speaker of the Libyan House of Representatives, Saleh, who has sided with Haftar on several occasions, and together have made attempts to undermine the UN-recognised Government of National Accord (GNA), said that one of the conditions for granting confidence to the interim government is the attendance of all HoR members, adding that official HoR meetings would convene in Benghazi only.

He also hinted at rejecting any HoR meeting outside Tobruk or Benghazi even if the meeting had a full quorum, reiterating the need to preserve the regions' rights in ministerial portfolios and saying he wouldn't accept to see the new government based in Tripoli until the capital is "cleansed and secure".

As it was revealed, foreign fighters - including the Russian Wagner group and some other factions who have been fighting alongside Khalifa Haftar - are in control of Sirte.

On January 22, reports emerged that a huge trench being dug by the Russian-backed Wagner group, along with other mercenary groups, indicated they plan to stay in Sirte.

As per the UN-brokered peace deal, these mercenaries were already meant to have left Libya.

Previously, Saleh came under international criticism for encouraging the Egyptian military-dictator-turned-president Abdel Fattah el Sisi to enter the Libyan conflict and use military force against the GNA if it attempted to liberate the strategic city of Sirte from Haftar's occupation. 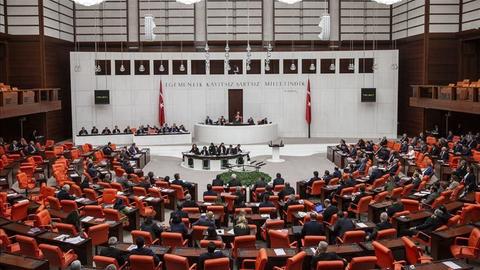