The French president's ability to grab headlines with tough talk hasn't helped him earn any foreign policy dividends. Even his allies have begun to find his speeches flat.

French President Emmanual Macron sees himself as a man on a mission to reshape the world. Failing that, he could settle for the modest prospect of reshaping Europe instead.

To seasoned observers, it does seem that Macron has a penchant for making regular and grandiose announcements.

Only in 2017, when still a shiny new object on the international scene and fresh from his election victory, he outlined in a landmark speech the need for a “sovereign, united, democratic Europe.”

In 2019, he declared NATO braindead and that he was the man to rescue Europe from a strategic slide to irrelevance.

It comes as no surprise and perhaps like clockwork that Macron has once again delivered a speech which has been advertised in typical Gaelic quietism as the Macron doctrine.

His speech, following Joe Biden's presidential victory in the United States, was intent on sending a crucial message, one to say that his administration will likely continue to push strategic independence from the United States, despite also striving to maintain good relations with America.

Speaking on a myriad of subjects ranging from global trade, the coronavirus pandemic, Brexit, climate change and economic turmoil, Macron believes that the European Union should operate independently on the international stage.

Following the Biden victory, Macron wondered whether the “change in the American administration is going to see Europeans letting up?”

He warned EU capitals believing that “the changeover of administration in America is an opportunity to pursue, in a totally peaceful and calm manner, what allies need to understand among themselves, which is that we need to continue to build our independence for ourselves, as the United States does for itself and as China does for itself."

Internationally, even as Macron lauds the EU to take a more strident course of action, France has had little to show in the way of success when it has had the opportunity to do something.

In Mali, for instance, France has deployed troops in a bid to fight terrorism, however, after more than eight years there has been little to show in the way of success.

There are even protests in Mali decrying “French occupation” and demanding that its troops leave.

Libya similarly has been another foreign policy misadventure for Macron. His backing of the Libyan warlord Khalifa Haftar against the UN-recognised government in Tripoli has drawn condemnation.

Macron, on the one hand, has urged the EU to take a common position on Libya, while the EU largely backs the Tripoli-based government. On the other hand, Macron backs a warlord who seeks to overthrow that government. That double game has undercut much of what he seeks from other European capitals.

The inability of Macron to successfully show what a French foreign policy would like, has, in many ways, underlined the limits of French power.

Macron argues that the EU shares a “cohesive political and cultural space” which could make it a strong international actor, however, many other EU capitals have different priorities that do not require boots on the ground in faraway places.

“For all the grandiosity, France is a middle power that struggles to shape outcomes, even in the near-abroad, by itself,” said one analyst. It’s not hard to see why.

In the war between Armenia and Azerbaijan, that has now been raging for two months, France was cut out of the negotiations, leaving Russia and Turkey to work out the details. Macron had attempted to insert himself but to little avail.

His attempts to convince the EU to sanction Turkey or take a harder line, have also garnered little momentum even as Macron has invested a great deal of political capital in trying to achieve such an outcome.

With each political setback on the international stage, Macron's ability to grab headlines with strong words has diminished. With a lacklustre record behind him, it has been difficult to engage cautious Germans from buying into any grand narratives.

When the German defence minister Annegret Kramp-Karrenbauer recently wrote an op-ed to say the EU still needs America, Macron publicly chided her for her “historical misinterpretation” as part of his doctrine, a move that is unlikely to garner more allies in Berlin.

With each passing speech, Macron’s attempts to drive the European Union towards his vision of a sovereign united bloc has garnered increasingly fewer reactions. There comes a point where the French president could also slip into irrelevance. That, however, might not stop Macron. 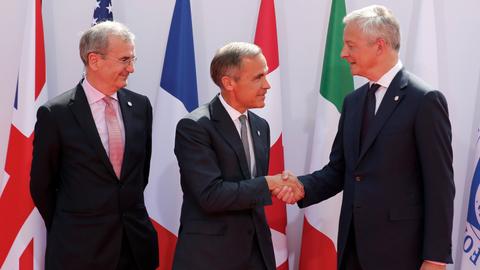