Why the architects of Trump's Palestine deal were inherently biased

The four American men who played a key role in shaping the so-called Deal of the Century have a history of speaking the language of Israel's far-right, showing complete indifference toward the plight of Palestinians.

As US President Donald Trump announced the 'Deal of the Century' on the long-standing Israeli-Palestine conflict last week, the president - facing his own impeachment trial - failed to evoke any positive response both from Palestine and the international community.

The deal was doomed to fail for many reasons, ranging from its false premise to the absence of Palestinian leaders who snubbed the move outright. Another reason why the deal came across as a hoax was down to its key architects: Trump's son-in-law Jared Kushner; pro-Zionist American casino mogul Sheldon Adelson; war hawk Mike Pence; and the US ambassador to Israel, David M. Friedman, a strong supporter of Israeli settlement construction.

With arbiters like those, the trajectory of US policy towards the Palestinians, already deferential to Israeli interests, lost whatever little semblance of partiality was left.

Here's a quick look at the deal's four architects — Kushner, Adelson, Pence and Friedman — and their controversial positions on the question of Palestine's future.

Born in 1981 in New Jersey, Kushner is the grandson of Joseph Kushner who was a Jewish Holocaust survivor from Novogrudok, Belarus.

He grew up in New Jersey's Orthodox Jewish community and attended Jewish schools that drew parallels between Judaism and Zionism.

Kushner's classmates were expected to draw maps of Israel without consulting any books or notes, just from memory, and they often identified West Bank by its biblical names, Judea and Samaria, an expression Zionist leaders use to lay claim to the Arab lands.

In 2003, Kushner graduated from Harvard University and reports emerged that his father donated $2.5 million to boost his son's chances, a charge his family denies.

He came under the spotlight in 2007, the year when he married Trump's daughter Ivanka Trump. By 2016, Kushner was helping his father-in-law to become the US president, managing his online campaign. Ever since he has played an important role in shaping America's foreign policy, taking a central role in 'resolving' the Israel-Palestine conflict.

Kushner has previously come under criticism over his murky business dealings and links with far-right Christian evangelical groups. In 2017, 10 evangelical leaders issued statements in support of Kushner, describing him and his wife as an example of “God to use a young Jewish couple to help Christians”.

After Trump unveiled his notorious Palestine deal, Kushner defended it, disregarding underlying political questions of territorial control and Palestinian sovereignty. In a TV interview, he bragged about reading '25 books' on Israel and Palestine, a claim that came across as a desperate attempt to establish some kind of authority over the subject. He was also condescending — and racist as per some observers — towards Palestinians, as he claimed they are "going to screw up another opportunity, like they’ve screwed up every other opportunity that they’ve ever had in their existence”.

As the US elections draw close, it seems Trump wants to keep enjoying Evangelicals’ support as he did before, when he received more than 80 percent of his votes from the group following his promise to become Israel’s best friend during his campaign.

Since the beginning of his presidency, Trump has taken several actions against Palestine. His Israel-centred policies are the combination of Christian supremacy and Evangelism, following his decision to appoint Kushner as the Senior Middle East Advisor tasked with creating a so-called peace plan between Israel and Palestine - a move overwhelmingly supported by the US evangelists.

Growing up in Boston, Adelson was the son of a cab driver with sixth-grade education. As his wife claims, he was beaten up for being Jewish when he was a child. He is an entrepreneur who started more than 50 businesses and lost his fortune in the late 1960s when he was in his thirties

In the mid-1990s, he became extraordinarily rich when in 1995 he sold the pioneering computer trade show Comdex to the Japanese conglomerate SoftBank for $800 million and started business in gambling by opening his Venetian casino resort in 1999 in Las Vegas.

He saw former president Barack Obama as a threat and spent $150 million in a futile attempt to unseat the “socialist” and “anti-Israel” president in the 2012 elections. It was not enough just to back Newt Gingrich.

However, in 2016, the Las Vegas billionaire donated $82m towards both Trump’s and other Republican campaigns and his views, including his remarkably staunch support for Netanyahu has become the official US line.

His commitment allowed him to push for the appointment of Bolton as national security adviser which would be an important step towards killing the nuclear deal with Iran. As the New York Times reported, he became a member of ‘shadow National Security Council’.

Consequently, following Trump’s announcement about the US decision to pull out of the Iran agreement, he was reported to have held a private meeting at the White House with Trump alongside Bolton and Pence.

He was also the man who pushed the US to move its Israel embassy from Tel Aviv to Jerusalem. Adelson was vocally supportive of the move to recognise Jerusalem as Israel's capital, he even offered to pay for a new US embassy there. He cheered on the president as details of the new proposal were read out.

Adelson’s considerable support for Republicans is in no small part motivated by what he regards as their more reliable support for the policies of Netanyahu, which appear intent on preventing the creation of an independent Palestinian state.

The vice president of the US, said: "Israel's enemies are our enemies, Israel's cause is our cause. If this world knows nothing else, let it know this: America stands with Israel".

Pence used to work as a lawyer and became governor of the Hoosier State in 2013. He describes himself as a pretty ordinary Christian, a conservative and a Republican. He also said: "I made a commitment to Christ. I'm a born-again, evangelical Catholic."

He grew up in an Irish Catholic family and he and his family attended Grace Evangelical Church in the 1990s.

Trump chose him as the vice president as he believed that Pence has a strong pro-Israel sentiment which would help him strengthen his relations with Jewish voters.

In 2009, he stated his support for Israel and said: "Let me say emphatically, like the overwhelming majority of my constituents, my Christian faith compels me to cherish the state of Israel."

Prior to becoming the US ambassador to Israel, Friedman, 60, was Trump’s top bankruptcy lawyer. He's well known for supporting the illegal Israeli settlements on the Palestinian lands, a position that makes him radically tilted in favour of Israel and blemishes his role as an independent arbitor in the Israel-Palestine conflict.

Unlike previous American ambassadors, who avoided making public appearances in East Jerusalem, Friedman attended a business conference held at an illegal Jewish settlement in the West Bank, an act that was seen as a major diplomatic transgression by a top American official.

Friedman has even shown his disregard toward the Oslo Accords, an agreement that leaves Jerusalem to be negotiated by Palestinians and Israel, strongly rejecting any unilateral move on the future of the city. 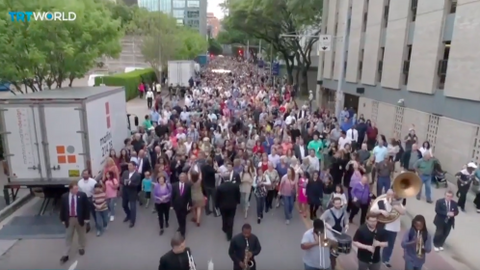 How US evangelicals can influence Trump's decision-making