Will Turkey's drone industry be affected by UK firm's cut in exports?

Andair, a British aerospace company, says it suspended sending drone parts to Baykar, a Turkish arm manufacturer, on the request of the Armenian embassy.

British company Andair has said it will not supply drone components to Turkey’s leading arms company Baykar after receiving complaints from the Armenian embassy in London.

Baykar is the producer of the famous Bayraktar TB2 drones, which have made their name in the world’s arms industry and on various battlefields from Libya to Syria, and most recently in Azerbaijan.

Armenians have substantial and influential diasporas living across Europe, the US and Russia, where their lobbying efforts frequently manage to effect change. The recent Andair decision appears to be the result of Armenian lobbying efforts in the UK.

“Andair Ltd was approached by the Embassy of Armenia on 02/11/2020, requesting that we stop supplying Baykar Makina as they were using our products on armed drones,” said a company statement dated on January 11, 2021.

Defence experts think the firm’s decision will have little effect on the Turkish company’s production processes and operational capabilities of its drones.

Turkey is the world’s second biggest user of drones. Experts credit Turkish drones as one of the decisive factors in Azerbaijan’s military victory over Armenia in the 44-day long arm campaign between the two neighbours over the Armenia-occupied Nagorno Karabakh region.

A check valve functions to operate fuel to flow through it in only one direction. Water holders are used to receive water when the fuel mixed with water goes through the valve. Due to the fact that water is heavier than fuel, it separates from the fuel and goes down the water holder.

Experts say that those drone fuel system components are available across the world to buy commercially and off-the-shelf (COTS). As a result, it’s unlikely to have a significant effect on Baykar’s Bayraktar TB2 drone production, they say.

In addition to Cots, Baykar could also effectively produce those fuel system components indigenously. “According to our own knowledge, Baykar Savunma (Defence) has designed a much more advanced check valve for its AKINCI combat drones by its own engineering power,” wrote Anil Sahin, a defence expert.

Some reports have previously claimed that Baykar also purchased bomb racks, a crucial part of drones, which are used to operate missile release systems, from a UK-based firm, EDO MBM Technology. It is owned by an American company, Harris Corporation.

But Selcuk Bayraktar, the chief executive of Baykar, firmly rejected those claims. He said that Baykar designed its own version of bomb racks, which are a “much more advanced model at an affordable cost”.

Andair is not the first company to declare a cessation of supply of drone components to Baykar and other developing Turkish arm companies as Turkey’s arm industry has become a global competitor with its indigenously-developed technologies and products.

Under the Canadian foreign ministry pressure, the same month, the Canadian WESCAM company also halted its exports of MX-15-model thermal cameras, sensors and optics to Baykar.

But both moves have made little effect on Baykar’s speedy production.

To replace imported components, which were not available to Baykar anymore, the company has enhanced its connections with local producers like Aselsan, one of Turkey’s leading military technology companies, and TEI (TUSAS Engine Industries Inc.). Eskisehir-based TEI is an incorporated company established in 1985 as a joint venture of Turkish Aerospace Industries Inc., General Electric (GE), Turkish Armed Forces Foundation (TAFF) and Turkish Aeronautical Association (TAA).

Baykar continues to test both Aselsan’s CATS FLIR cameras and TEI's PD170 engines. Aselsan's CATS have been considered to replace Canadian MX-15 cameras, and there are plans for TEI’s PD170 engines to take the place of Canadian 912 aircraft engines. 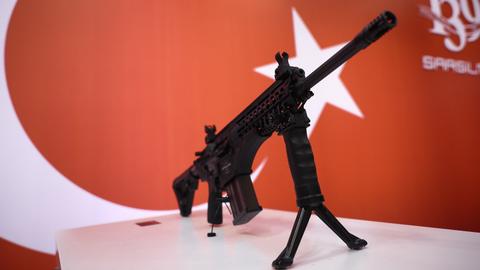