US envoy to Turkey denies Washington is arming YPG

Washington's ambassador to Turkey says that US has not been arming YPG, militant wing of PYD, which Turkey considers Syrian extension of terrorist group PKK and US regards as its ally in fight against DAESH

The United States is not providing YPG, the militant wing of the PYD, with weapons or ammunition, US Ambassador to Turkey, John Bass, said on Thursday.

He indicated in a press conference with a group of diplomacy correspondents in Ankara that Washington is opposed to efforts by any Syrian group to change the demography of a region "under the guise" of fighting DAESH.

Turkey considers the PYD as the Syrian extension of the PKK and a terrorist group, though US administration regards the PYD as an ally in the fight against DAESH. This has recently led to growing tension between Ankara and Washington over its policy in northern Syria.

The PYD expansion in northern Syria, against DAESH, has been supported by US-led air strikes until now. The Pentagon confirmed last October that its cargo planes dropped "small arms ammunition" for the Syrian Democratic Forces (SDF), which was a newly-formed militant coalition at the time led mainly by YPG.

Turkey raised concerns last summer over border security and displacement of Turkmen and Arabs from Tal Abyad following YPG occupation of the district, which lies within the Raqqa Province of Syria across the Turkish border district Akcakale in Sanliurfa Province.

Bass has additionally urged PKK to lay down its weapons and cease attacks on Turkey, which has long been confronted with armed attacks in its eastern and southeastern regions by PKK terrorists.

"We call again on the PKK to stop its campaign of violence and to put down its weapons," he pressed the armed group which is listed as a terrorist organisation by Turkey, the US, the EU, and NATO.

The terrorist group's umbrella organisation, KCK, unilaterally ended a two and half year-long ceasefire last year and threatened the country with further attacks, as a result PKK terror attacks have killed more than 350 security officials in Turkey since last July.

Bass also indicated that US officials are discussing how the moderate Syrian opposition can push DAESH farther east in Syria with the Turkish military and government.

"We have had some progress in recent weeks as these groups pushed further east along the border," Bass informed. "We will continue to focus on that area," he said.

Syrian opposition forces seized numerous villages from DAESH terrorists near the Turkish border, earlier in the week. The offensive included factions fighting under the banner of the Free Syrian Army that has long been backed by Turkey.

A sustained opposition advance near the Turkish border would erode DAESH's last foothold in an area identified by the United States as a priority in the fight against the terrorist group.

"There is conversation with the Turkish military and government to talk about opportunities to intensify support to those groups and to push DAESH east from the current line," Bass added.

"Without Turkey it would have been much more difficult to, for instance, conduct many of the air strikes and so on fighting ISIL [DAESH]," he declared. 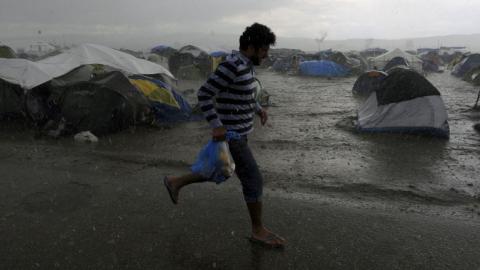 ‘Safe zone' calls for Syrian refugees in an unsafe country