A rise in US-Iran tensions and a lockdown imposed by coronavirus effectively snuffed out the movement earlier this year, leaving a few desolate protesters camped out in squares across the country.

The protests first erupted in Baghdad and southern cities in October, demanding an end to corruption and unemployment and an overhaul of the ruling class.

But internal splits, a rise in US-Iran tensions and a lockdown imposed by coronavirus effectively snuffed out the movement earlier this year, leaving a few desolate protesters camped out in squares across the country.

By noon, dozens had gathered at the epicentre of the protest movement in Tahrir Square.

"The people want the fall of the regime!" they shouted, pelting rocks and Molotov cocktails at security forces blocking off the adjacent Al-Jumhuriyah bridge, which leads into the high-security Green Zone hosting government offices and foreign embassies.

The protesters, mostly teenage boys, managed to clamber over a first barrier on the bridge as security forces responded with water cannons and tear gas.

A medical source said  that 20 protesters had suffered breathing difficulties from the gas but no shots were fired.

In Nasiriyah, a protest hotspot further south, dozens of protesters shut off streets with burning tyres and threw rocks at security forces, who responded with tear gas.

Their demands echoed the previous rallies: early elections under a new voting law and accountability for the more than 550 people killed in protest-related violence since October.

Protesters turned out overnight in the city of Kut, setting fire to the headquarters of the Iran-backed Badr Organisation and to the home of an MP affiliated with another Tehran-aligned faction, according to an AFP correspondent.

The rallies came just hours after Kazimi appeared to extend a hand to the anti-government movement by promising to release arrested demonstrators and compensate the families of those killed while protesting.

He also reinstated and promoted General Abdulwahab al-Saadi, a popular military figure whose abrupt dismissal by previous premier Adel Abdel Mahdi in September had been a main catalyst of the first protests.

And Kazimi called on parliament to adopt the new electoral law needed for early polls as demanded by the protesters.

"We will give him 10 days to prove himself, and if our demands aren't met, then we will escalate," said Mohammad, a student protester returning to Tahrir on Sunday.

"Today is a message."

Judiciary to release some protesters

Iraq's judiciary ordered courts on Sunday to release anti-government protesters, carrying out one of the first decisions of the recently inaugurated prime minister.

Kazimi also promoted a well-respected Iraqi general, who played a key role in the military campaign against Daesh, to lead counter-terrorism operations.

The Supreme Judiciary Council said in a statement that it had ordered the release of protesters detained since those demonstrations erupted, in line with the new prime minister's call.

The council released detainees based on Article 38 of the constitution which guarantees the right to protest, "provided that it is not accompanied by an act contrary to the law," the statement said. 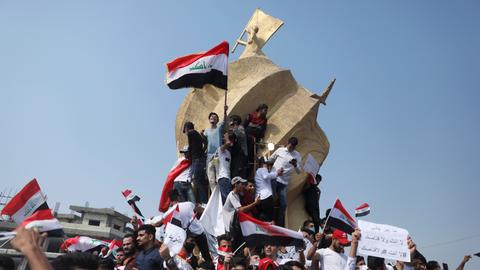