The UAE's decision to normalise ties with Israel could propel Saudi Arabia to deepen its furtive relations with the Jewish state as Riyadh seeks to entice investments to fund an ambitious economic transformation, analysts say.

The United Arab Emirates on Thursday became the first Gulf state to normalise relations with Israel, in a historic US-brokered accord that raised the prospect of similar deals with other Arab states.

Saudi Arabia, the Arab world's biggest economy, has maintained a conspicuous silence over the deal, but local officials have hinted that Riyadh is unlikely to immediately follow in the footsteps of its principle regional ally.

However, "the UAE-Israeli normalisation lends itself to expanding the realm of indirect Saudi-Israeli relations," said Aziz Alghashian, a lecturer at Essex University specialising in the kingdom's policy towards Israel.

"I think Saudi-Israeli interactions will increase via the UAE."

Needless to say how significant the #UAEIsrael deal is
But, I think this does not mean other countries, namely #SaudiArabia will follow suit.
Instead, the UAE-Israeli normalisation lends itself to expanding the realm of indirect Saudi-Israeli relations, and not direct relations https://t.co/ZqCJJQFBl4

Home to Islam's holiest sites, Saudi Arabia would face sensitive political calculations before a formal recognition of the Jewish state.

Like the UAE's move, such a step would be seen by Palestinians and their supporters as a betrayal of their cause.

But the kingdom has already cultivated covert ties with Israel in recent years, a shift spearheaded by Crown Prince Mohammed bin Salman even as his father King Salman has voiced steadfast support for an independent Palestinian state.

A shared animosity towards Iran, along with Saudi attempts to attract foreign investment to fund Prince Mohammed's ambitious Vision 2030 economic diversification plan, appear to be pushing the kingdom closer to Israel than ever.

A centrepiece of Vision 2030 is NEOM, a $500 billion planned megacity on the kingdom's west coast, for which observers say the kingdom requires Israeli expertise in areas including manufacturing, biotechnology and cyber security.

The creation of NEOM "requires peace and coordination with Israel, especially if the city is to have a chance of becoming a tourist attraction," said Mohammad Yaghi, a research fellow at Germany's Konrad Adenauer Stiftung.

NEOM is set to be built close to the Israeli resort town of Eilat, along the geopolitically sensitive waters of the Red Sea and the Gulf of Aqaba.

Gulf states have increasingly sought Israeli technology for the surveillance of their own citizens and to purchase precision missiles that Western countries are unwilling to sell, Yaghi wrote in a research paper in April.

Saudi Arabia has sought to keep its outreach to Israel out of the public eye, but it has not been easy.

In June, a verified Twitter account linked to the kingdom's embassy in Washington said the Saudi council of ministers had agreed to recruit Israeli cyber security firm Check Point Software in NEOM.

The embassy later denied the claim and distanced itself from the account.

Marc Schneier, an American rabbi with close ties to the Gulf, quoted Saudi Arabia's deputy defence minister Prince Khalid bin Salman as once telling him that Israel was an "integral part" of achieving Vision 2030.

Schneier made the comment to AFP in May, and Saudi authorities did not dispute that the prince made the remark.

In a conversation with @DiarioLibre (#DominicanRepublic), I was asked if other Gulf countries will follow the UAE's announcement and I shared that I know this will have a ripple effect in the region. Without a doubt, other Gulf states will follow. https://t.co/fveT7TaETo

"I forecast a future that entails the creation of a joint high-tech ecosystem among [Gulf Cooperation Council] countries, known as the 'Silicon Wadi'," Israeli consultant Nave Shachar wrote last week for the English website of Al Arabiya, a Saudi-owned broadcaster.

Shachar, who according to his LinkedIn profile was previously employed by the Israeli defence ministry, was referring to a regional equivalent of Silicon Valley.

"Now, more than ever, it is in the best interest of Israel and the GCC to increase business cooperation," he said.

But Saudi Arabia appears to be resisting Washington's pressure as it has more at stake than the UAE.

"I do think it is an inevitability that Saudi Arabia and Israel will have fully normalised relations and they will be able to do a lot of great things together," said Jared Kushner, an advisor to Trump, said at the weekend.

"Saudi Arabia has obviously been a great leader in making (modernisation) but you can’t turn a battleship around overnight," Kushner told CNBC.

"This bold initiative by the Emirates will strengthen the generational forces that would like to see this happen now," he told AFP this week. 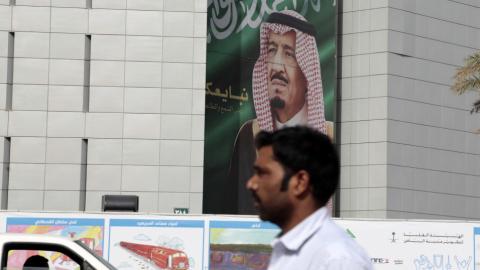