Can the US exit Afghanistan?

Given the looming May 1 deadline for the US troop withdrawal, Washington is making a last-ditch attempt to reinvigorate the fading intra-Afghan talks and make a dignified exit from the country.

A little over a year has passed since the US and Taliban signed the Doha Agreement in February 2020 in what was billed as a historic attempt to reduce violence in Afghanistan and help it transition towards a state of peace and security. However, 2020 proved to be a year of slow to no progress, courtesy of the pandemic that still rages.

The Afghan peace process, or what is more commonly known as the "intra-Afghan talks", proved to be no exception to this worldwide trend, especially as the talks between the members appointed by the Government of Afghanistan and those by the Taliban barely moved forward.

Instead, the situation in Afghanistan continued to deteriorate as negotiating parties looked for ways to maintain an upper hand in deciding the fate of a conflict that has endured for more than four decades.

A steep rise in the target-killings of Afghan (women) journalists and politicians and an increased threat to provincial capitals by the Taliban has become the unfortunate reality of Afghanistan even as the country has registered a 15 percent decline in civilian casualties in 2020.

Perhaps this change of tack reflects the Taliban's recalibrated approach to the conflict in Afghanistan, wherein bound by the Doha agreement, its attention has entirely shifted to the Afghan political class and civil society leaders in a clear case of show-and-tell.

As the snow melts in the Hindu Kush, Afghanistan is staring at the possibility of witnessing another round of the Taliban-led spring offensive. A flowery euphemism for renewed insurgent attacks, there is nothing spring-like in these offensives. Far from it, they have proven to be highly bloody not only for the Afghan (and international) forces who are killed in action but for the people of Afghanistan at large.

Often named after the Taliban's deceased leaders or on other eschatological grounds, these offensives have only become deadlier by the year since they were first launched. But what, perhaps, makes the expected spring offensive unpredictable and more dangerous is the geopolitical context in which it might unfold.

According to the Doha Agreement, the US, then led by President Donald Trump, had committed to a complete withdrawal of American forces from Afghanistan by May 1, 2021. However, this withdrawal was contingent on a demonstrable reduction-in-violence by the Taliban as well as its conscious abjuring of supporting, recruiting and training any element that might threaten the security of America and its allies.

A part of the deal also included a commitment on the part of the Taliban not to attack American forces stationed in Afghanistan and whilst on their way back to the US.

Having stuck to the America-centric aspects of the bargain, the Taliban has shown little earnestness in fulfilling its first commitment, though. In fact, in a statement recently issued by Khairulla Khairkhwa -  a member of the Taliban’s negotiating team - he maintained that the Taliban will continue to wage its war against the present Ashraf Ghani-led administration unless a truly Islamic government is established in Afghanistan.

Although there were occasions last year when the Taliban supported the Afghan government, particularly in the latter's drive against the pandemic, these were only parenthetical and temporary to merit serious consideration. The two sides continue to be at odds with each other to such an extent that they have done little apart from agreeing to disagree over the past year.

The arrival of Joe Biden in the White House in January 2021 brought with it some stark administrative changes that were bound to impact America's foreign policies. And, so they did. However, for Biden, who had said little about Afghanistan during his election campaign, the problem surrounding this country proved to be far more intractable. It was, in a way, more of the same except that the war at hand needs immediate action.

Like those in the past, the Biden administration inherited a war that was not entirely of its own making. But what has made the current situation even murkier is that the current administration finds itself dealing with a peace deal that it can neither swallow nor digest.

Dealing with what an unnamed US official has described as a "sh*t sandwich", Joe Biden and his team are staring at a ghastly possibility of a Taliban take-over should the US stick to withdrawing its forces by May 1.

However, if the US decides to stay put in Afghanistan, it risks a much deadlier "Tet-like offensive" from the Taliban. Given the looming deadline, the US neither has the time nor the watch in its control as the options it can consider can be "framed as failures".

In these circumstances, the new Secretary of State, Blinken, was seen making a last-ditch attempt to reinvigorate the fading intra-Afghan talks and arrive at an agreement that may allow the US some breathing space to determine its future course.

In a letter leaked to the Afghan media, Blinken suggested a four-prong approach to "move matters more fundamentally and quickly toward a settlement and permanent and comprehensive ceasefire". This prescriptive text, which was deemed disturbing and even neo-colonial, anticipated a draft agreement that envisions establishing a "transitional, Peace government".

This draft was shared by Zalmay Khalilzad, the US Special Representative for Afghanistan Reconciliation, both with the Taliban and the Afghan government.

Although Blinken's letter stated that the suggestions therein and those proposed by Khalilzad are "intended to jumpstart Afghanistan Peace Negotiations", they betrayed a sense of American wantonness to get out of Afghanistan on its terms and at its own pace.

For that matter, the leaked letter and the draft showed little regard for Afghanistan's agency to determine its course of action, doing away with whatever pretence of 'Afghan-led, Afghan-owned and Afghan-controlled' sentiments that the intra-Afghan talks had previously carried.

Besides conveying America's anxiety to get its act together on Afghanistan, the regionalisation of the Afghan conflict and its management is equally evident in Blinken's letter. By spelling out the responsibility of regional actors, including China, Russia, Iran, India and Pakistan, to "discuss a unified approach to supporting peace in Afghanistan", Chris Kolenda suggests that the US is effectively resetting the peace process by focusing more on regional relationships.

While this supposed regional devolution of America's responsibilities is of critical relevance to countries like India, which had deliberately been kept out of the Afghan peace process because of geopolitical machinations, the US must know that arriving at a consensus will neither be easy nor quick.

Some of the parties involved are, in fact, in an adversarial relationship with each other. So, to expect them to develop a unified approach and that too by May 1, 2021, is improbable.

If the recently convened Moscow talks are anything to go by, the Afghan peace process is yet to transition from the want-to-talk to a have-to-talk stage. In other words, the situation in Afghanistan is anything but ripe for the talks to begin. So, the issue of 'what to talk about', which Khalilzad seems to have provided in detail, will continue to be of little use, at least in the near future.

Regardless of what the regional or major powers think and recommend, the situation in Afghanistan can only be inflected by their respective desires but not driven by them.

To assume such a role will not only be costly and burdensome, as the continuing American misadventures prove, but it will also be unacceptable to a society that takes pride in being fiercely independent.

Both the intention and objective of any peace process for Afghanistan must be to foster a genuinely Afghan-led, Afghan-owned and Afghan-controlled dialogue that can help settle the conflict, hopefully, once and for all. Chayanika Saxena is a President’s Graduate Fellow and PhD candidate at the Department of Geography, National University of Singapore. She has more than seven years of research experience on Afghanistan and has published extensively in international media. 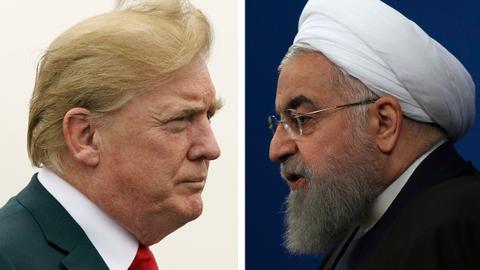 Does Trump’s Syria policy have some logic to it, and will Tehran see it?