Last month, the French Court of Appeal dismissed an appeal by Nicolas Sarkozy against the French website Mediapart. The former French President (2007-2012) accused the site of producing a "fake document" in 2012 relating to accusations of the financing of his 2007 presidential campaign by the deposed regime of the late Colonel Gaddafi of Libya.

The document, contested by Nicolas Sarkozy, was published on April 28, 2012 by Mediapart between the two rounds of the French presidential election. The document is attributed to Moussa Koussa, former head of Libya's foreign intelligence services. Now in exile, Koussa claims that Tripoli had agreed to finance for "50 million euros" Nicolas Sarkozy’s winning campaign in 2007.

His first investigation was a trial on separate charges of illicit spending overruns during his failed re-election campaign of 2012.

As for the second case, comprising even more serious allegations of having accepted money for the campaign from the late Gaddafi, Sarkozy’s case reached a legal turning-point in March 2018 when he was taken into police custody (or ‘garde à vue’).

Nicolas Sarkozy has denied and continues to deny, all accusations that have been levelled against him.

Last year, Mediapart celebrated its tenth anniversary, and the Sarkozy-Libyan affair remains one of its most high-profile and ongoing investigations. The website received a great deal of criticism for breaking this story, most notably from Sarkozy’s supporters, former ministers, and from many other right-wing politicians.

The investigation over Sarkozy’s 2007 campaign is not over yet.

The head of Mediapart, Edwy Plenel (a former-editor-in-chief of France’s prestigious Le Monde newspaper, and a seasoned journalist and writer), revealed last year that Nicolas Sarkozy had been financed by Muammar Gaddafi.

A few months after Sarkozy took office in 2007, he became the first western leader in decades to host an official visit by Gaddafi, who was allowed to pitch his tent in the Marigny Gardens immediately opposite the Elysee Palace.

Several hefty business deals were signed on that occasion, including the sale of French military aircrafts to Libya.

However, things started to change in 2011, when Sarkozy was leading the push for a NATO military campaign. This would culminate in Gaddafi's overthrow, and his eventual killing at the hands of rebel forces later that year, which brings up the question asked by Plenel: whether Sarkozy wanted to eliminate any evidence of his illegal cooperation with the Libyan dictator.

Sarkozy’s campaign received a total of 4.5 million euros from Libya in 2007, Saif al Islam Gaddafi says in a letter dated 11 July 2018, according to Le Monde.

Saif al-Islam first made the accusation in 2011, as his father's regime was in the process of being overthrown by Western-backed militias, leading to the French investigation.

The letter does not provide proof, although Saif al-Islam insists he has it, but it does add some lively detail to the account.

Sarkozy's messenger, Claude Gueant, apparently had to stand on the suitcase containing the first payment of 2.5 million euros to close it because it was so full of cash, the letter says, citing Bashir Saleh Bashir, the Gaddafi aide who allegedly handed it over as the source of the anecdote.

According to Mediapart, two French judges travelled to Tripoli earlier in February 2019 when they questioned, for the first time face-to-face, Gaddafi’s former spy chief, and brother-in-law, Mohamed Abdulla Senussi.

The French website has gained access to extracts from the statements provided by Senussi, who detailed how he oversaw the payment of 7 million euros for Sarkozy’s campaign, as ordered by Gaddafi. He also confirmed that, as part of the deal, the former French president’s lawyer and friend Thierry Herzog was involved in moves to overturn an international arrest warrant issued against Senussi after his conviction in absentia by a Paris court for his part in the blowing up of a French airliner in 1989.

Senussi added that the former French premier had later ordered air strikes on his house to destroy evidence that could implicate him in the future.

Senussi’s latest statement is also believed to detail the time frame in which the money was transferred to the French interior minister over two instalments in 2006. According to Mediapart, Senussi’s testimony is in line with some of the evidence already collected by the investigators, while other details still need fact-checking.

Recently a Franco-Algerian businessman arrested in Britain as part of a probe into France's former president Nicolas Sarkozy claimed he was a "victim" of French magistrates at his extradition hearing in London.

Alexandre Djouhri is a key figure in the investigation into the alleged Libyan financing of Sarkozy's 2007 presidential campaign.

France's judiciary system has been tracking down Sarkozy, his former interior minister and the former financial manager of his election campaign for charges of corruption, bribery and using foreign money in the elections campaign.

Sarkozy has been denying the accusations and has described Senussi as a gangster who has no credibility, saying Senussi tried to use the expertise of his lawyer to be exonerated from the bombing's charges, but the lawyer rejected it.

At some point, no doubt, judges will be compelled to ask Sarkozy why he participated in the attack on Libya, and what his motivation was in helping to depose his erstwhile friend and alleged paymaster Gaddafi.

For some people, these are serious allegations, and this case has taken a long time to solve. This is a serious problem for French democracy and elections.

It is worrying to see Sarkozy befriending President Macron and what looks like a genuine interest to keep his political life alive. 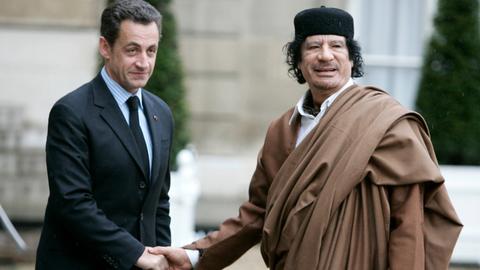 The dark side of Western intervention in Libya