A quarter of a century after the atrocities in Bosnia, dreams of a Greater Serbia still resonate.

The 25th anniversary  of the genocide in Srebrenica, the most horrific crime in Europe since World War II, just passed us.

The genocide that led to the death of over 8,000 men and the expulsion of over 25,000 women and children is however widely denied in the current Serbian political and public discourse, which is a blatant expression and the basis for reaffirmation of the expansionist “Greater Serbia” ideology, that already for one-and-half centuries claims territories from Bosnia and Herzegovina and Kosovo as part of Serbia.

This systematic reaffirmation of Serbian nationalist ideology has taken place under the careful tutelage of the current Serbian President Aleksandar Vucic, who in the 1990s served in the government of the "Balkan Butcher" Slobodan Milosevic and was one of the leaders of the neo-fascist Serbian Radical Party (SRS) led by the convicted war criminal Vojislav Seselj.

Part of Vucic’s political tool-kit is the pro-regime media machinery that insists on genocide denial through historical revisionism, rehabilitation, and promotion of convicted war criminals responsible for the genocide and ethnic cleansing against the Muslim population in Kosovo and Bosnia and Herzegovina.

Former high military personnel such as Nebojsa Pavkovic and Vladimir Lazarevic who had been sentenced by the Hague Tribunal are publishing books sponsored by the state and giving lectures in state academies. Moreover, numerous active politicians have also been convicted of war crimes, most notorious among them being Vojislav Seselj, who serves as an MP while advocating brutal fascist ideas and openly denying the Srebrenica genocide.

In addition, intellectuals, such as Srđa Trifkovis, Dragan Vanja Bokan and Darko Tanaskovic, all ardent proponents of Serbian expansionism and anti-Muslim sentiments during the 90s, are once again highlighted in the pro-regime media.

These intellectuals promote the idea of a threat by a “(pan)Islamic Serbo-phobic fundamentalism” and supposed plans to create some sort of an Islamic state in the Balkans. Apart from this “old guard,” in the past twenty years a new generation of academics, mainly historians, has successfully continued to popularise the extremist Serbian nationalist project.

In addition to glorifying the war criminals Ratko Mladic and Radovan Karadzic, they are devoted to the rehabilitation of the Chetnik movement which is responsible for genocide of the Muslim population in Eastern Bosnia and Sandzak region during the World War II.

Besides historical revisionism and the rehabilitation of war criminals, the current government also provides significant (in)direct support to ultra-right movements such as the National Avant-Garde, Serbian Right, Leviathan Association, and Serb Honor, which sow open hatred towards Muslims in Serbia and the wider region.

Also, through their social media accounts, they are reaching out to the younger generations to whom they are presenting the war criminals responsible for the genocide as a “pop-icons”.

As for relations with the countries that were affected by the genocide and the ethnic cleansing committed during the 1990s, Vucic and his government continue to degrade relations with representatives of the Kosovo Albanians.

During 2019, on several occasions the Prime Minister Ana Brnabic, the Minister of Interior Nebojsa Stefanovic and the Minister of Defense Aleksandar Vulin all openly threatened armed offensives on the territory of Kosovo.

Furthermore, the Serbian leadership constantly works together with Bosnian Serbs on the secession of the Republic of Srpska whose current President Milorad Dodik is a notorious denier of the Srebrenica genocide and a successor of Radovan Karadzic's policies.

In this context, Milorad Dodik is repeatedly given space in Serbian electronic and print media to promote the idea of ending what began with the genocide of Bosnian Muslims in Bosnia in the near or distant future. Thus, on several occasions, Dodik has even drawn maps on which Serbia and Republika Srpska are one state.

Such aspirations should serve as a red flag to the international community, which already once allowed the Serbian nationalist ideology to result in the atrocities against the Bosnian Muslims and Kosovar Albanians.

In light of the reaffirmation of Serbian nationalism, the international community must keep in mind that this shadowy and racist ideology that resulted in the genocide of Muslims in Bosnia and the ethnic cleansing in Kosovo is still alive and manifests itself in transnational networks as well.

Ultra-right and neo-fascist groups from France, Germany, Poland, Austria, Italy, Romania, Russia and Serbia maintain close ties, exchanging ideas about Europe as a Christian continent to which Muslims do not belong.

It is in this narrative the main "heroes" of Serbian nationalism such as Radovan Karadzic and Ratko Mladic serve as a source of inspiration to white supremacist organisations. Terrorists such as Anders Breivik and Brenton Tarrant were influenced by their genocidal actions. Their names became references in personal accounts and political manifestos of violent far-right extremists like Breivik and Tarrant, who also perceived other individuals from Serbian history as the most important figures in the fight to save "Christian Europe" from the invasion of the "Mohammedan plague".

In the light of 25th anniversary of the Srebrenica Genocide, widespread politics of genocide denial and reaffirmation of “Greater Serbia” ideology must be taken seriously by all international actors, not only because of the memory of all those killed but also because of the uncertain future facing Muslims in the Balkans.

Unlike their brothers and sisters in the West, who are endangered in exercising their legally guaranteed human rights, Muslims in the Balkans are constantly facing an elementary existential threat. In other words, as long as the dark Serbian nationalist ideology is in full swing, Muslims in the Balkans will wake up every morning wondering whether they will be exposed to a new genocide. The memory of Srebrenica, as well as the future, oblige all relevant world actors to remember and never forget this fact. Ivan Kostic is a PhD student at the Faculty of Political Sciences, University of Belgrade. 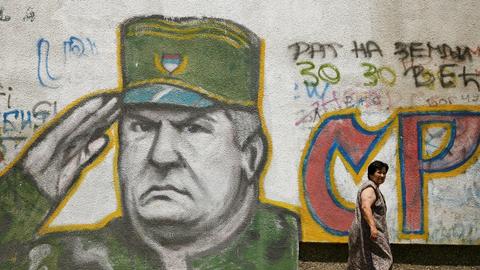