While one has borne the brunt of the migrant crisis from the embattled country, the other seeks to reap its benefits.

The ongoing conflict in Libya has resulted in a steady flow of migrants and refugees to Europe. This instability has also caused a proliferation of terrorist groups that use Libya as a base. The European Union (EU) aims to draw all conflicting Libyan parties into negotiations in order to promote a long-standing political solution to prevent a further influx of refugees into EU countries. The EU officially supports the UN-backed Government of National Accord led by Fayez Al Sarraj.

However, France and Italy are divided over policy towards Libya despite the official position of the EU, said European Parliament President Antonio Tajani, who has urged EU countries to speak with a single voice on the renewed crisis. Such unrest between France and Italy could also mean an increase in the influx of refugees into Europe.

Recently, Fayez Al Sarraj indicated that there could be an influx of more than 800,000 migrants from his country into Europe if the instability in his country continues.

Italy views itself as the ultimate arbitrator of Libyan affairs due to its prolonged colonial rule in the country, which began in 1910 and only ended in 1947. Rome, therefore, wants to preserve and widen its economic interests. Eni, the Italian energy company, has a long-standing presence in Libya and is currently its largest international oil producing company. This may explain Italy’s displeasure at France's interference.

“My fear is that someone, for economic motives and selfish national interest, is putting at risk the security of North Africa and, as a result, of Europe as a whole,” said Salvini.

In contrast, France had taken the lead on the 2011 military campaign to bring down the Gaddafi regime, which included an aggressive campaign of air strikes across the country. Since then, Paris views itself as a stakeholder in Libyan affairs.

France has supported Haftar as a primary actor in Libya because he controls the areas in which French interests lie, the oil fields in the east of Libya. France views Libyan oil as cheap to extract and easy to export to Europe.

In May 2018, the French president hosted the Libyan rivals in Paris for his own summit, during which they agreed to hold elections in December 2018. However, the election did not take place. French efforts were poorly coordinated with the UN.

The purpose of the conference was supposed to bring together rival groups and promote a political solution. However, France's main intention seems to be legitimising Haftar within Libya and abroad. Supporting Haftar to occupy Tripoli could be focused on undermining Al Sarraj’s role as prime minister and his credibility, as well as his negotiating leverage during the potential conference that could take place in the near future.

The interference of international powers and regional actors has been a significant factor in deepening political fragmentation and polarisation.

Although the UN-led process is moving slower than many had hoped, it is still the best hope for ending the civil war in Libya. Thus, France and Italy should approach the Libyan issue from a humanitarian perspective, not solely based on political or economic interests. If the international community’s response to his military strike remains as sketchy as it has been so far, warlord Haftar most likely will see more rooms to continue his military offensive that could lead to more violence.

Ferhat Polat is a Deputy Researcher at the TRT World Research Centre. He is a PhD researcher in North African Studies at the Institute of Arab and Islamic Studies in Exeter with a particular focus on Turkish Foreign Policy. 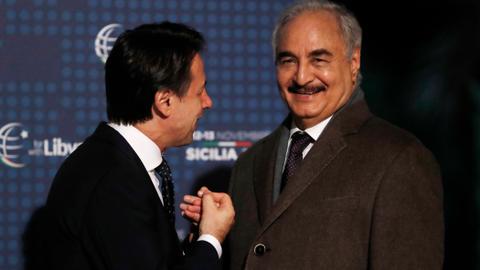 The Libya conference was a farce