Kosovo-Serbia: The US should act as a negotiator, not a cartographer

Kosovo-Serbia talks have been derailed but the US needs to get them back on track.

Last month, the president of Serbia Aleksandar Vucic and his Kosovor counterpart, President Hashim Thaci were supposed to meet with US Special Envoy Ambassador Richard Grenell at the White House to discuss ways to normalise relations between their countries.

At the 11th hour, the meeting was called off when the Specialist Prosecutor's Office at The Hague filed a 10-count indictment accusing Thaci of an array of war crimes and crimes against humanity.

The cancellation was unfortunate.

The Kosovo-Serbia divide contributes greatly to regional instability and prevents the Balkans as a whole from fully joining the Euro-Atlantic community. Many believe that if the Kosovo-Serbia problem can be resolved, then many of the other challenges in the Balkans will be made easier.

The US should make every effort to bring the both sides back to together as soon as is realistic.

The recent tension between these two countries has its roots in the various sectarian wars in the Western Balkans in the 1990s. In 1999, NATO carried out a short air war against Serbia to help Kosovo Albanians protect themselves from Serbian persecution.

When the war ended a few months later, Kosovo was placed under United Nations administration. In 2008 Kosovo declared independence from Serbia. Kosovo’s independence has been recognizsd by 114 countries— including all of its neighbors in the Balkans except Serbia.

Since Pristina’s declaration of independence, Belgrade has been orchestrating an international non-recognition campaign as an attempt to reduce the number of countries that recognise Kosovo as a sovereign state.

This is why last October the Trump Administration appointed the then US ambassador to Germany, Richard Grenell, to serve as the US Special Envoy for Kosovo and Serbia. The main focus of Ambassador Grenell since his appointment has been promoting confidence building measures, mainly focused on economic cooperation, to bring the two sides together.

It is hoped that by doing so, there can someday be serious and substantial talks about the normalisation of relations. Grenell has had some modest success. In February, Serbia and Kosovo announced the restoration of rail service between the two countries, for example.

It is important not give up on trying to improve the relationship between Kosovo and Serbia. As the US continues to get both sides together it should follow these five guidelines.

Even today, the US maintains 600 soldiers in Kosovo a part of the NATO-led mission. Even though it is thousands miles of away, the US is a Balkans power. This is why the United States has an interest in regional stability. US policymakers should not forget this.

Secondly, Ambassador Grenell should be a negotiator and not a cartographer. Due to the disposition of ethnic minority groups between the two countries some have suggested that Kosovo and Serbia could swap land to normalise relations. Swapping land under such circumstances would mark a dangerous precedent. Doing so would open up a Pandora’s Box in the region and beyond. The US should make it clear that it does not support a land swap or the changing of borders based off ethnic identity.

Thirdly, the US should not forget the important role that Europe plays in the Balkans. Even though Europe has been absent in the Balkans in recent years, the US needs to work with Brussels to get them more involved.

After all, it is the European Union that has the official mandate to negotiate a political solution between the two countries. The US has a role with assisting this effort. However fraught transatlantic relations might be, the US has to realise that long-term and enduring progress cannot be made unless Europe is involved.

Fourthly, the US needs to be patient with Kosovo’s progress. Kosovo is a poor country suffering from high unemployment and corruption. The US needs to understand that improvements in governance will be long and slow journey.

Even so, the US needs to support Kosovo along the way. In particular, the US should pursue policies that engages the nation’s youth and rebuilding a robust civil society in a dynamic economy.

Finally, the US needs to keep its eyes wide open when dealing with Serbia. Some Serbian politicians talk the talk when it comes to Euro-Atlantic integration but then continue to court the Kremlin.

US policymakers should be fully aware that Serbia is Russia’s foothold into the region and that Moscow wields huge influence with Belgrade. This is why President Vucic first visited Moscow before we was supposed to fly on to Washington DC. Russia, often enabled by Serbia, is the source of a lot of instability in the region.

Nothing is easy in the Balkans. The normalisation of relations between Serbia and Kosovo will be a process and not a single event.

It will be a long journey with many ups and downs. But a normalisation of relations between Kosovo and Serbia will help bring stability to the region and usher in a new era of Euro-Atlantic integration.

This is why the US must continue its efforts and not give up. 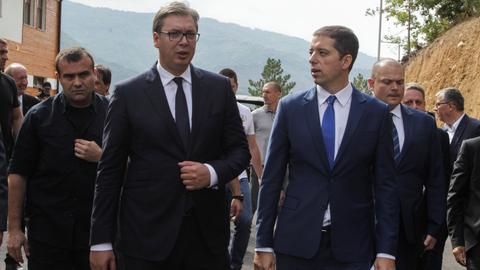 Serbia's Vucic says long road ahead in talks with Kosovo