In an interview with TRT World, the former president of Brazil defends Dilma Rousseff, his protege, who was impeached in August. He also questions the elevation of Michel Temer to the presidency – and hints that he may run for another term.

SAO PAULO, Brazil - A series of scandals hit Brazil in March 2016, leading to the impeachment of former President Dilma Rousseff. The multi-billion dollar controversy centered on Petrobras, the state-controlled oil company, and broke out as the country was in the midst of its worst-ever recession. Her key ally and predecessor, former President Luiz Inacio Lula da Silva, has also been drawn into the debacle, which has changed Brazil's political landscape.

Lula da Silva, who is affectionately called "Lula," is credited with having transformed Brazil during his eight years as president (2003-2011). He implemented social programmes and reforms that lifted hundreds of thousands of people out of poverty.

He promoted land reform, university quotas for minorities, and financial incentives to help poor families keep their children in school. He travelled the world making new friends and allies for Brazil, and won the right for the country to host its first World Cup and Olympic Games. As Brazil's image improved abroad, foreign investments poured in and the economy flourished.

Now, however, the man once called the "most successful politician of his time" is facing three criminal investigations.

He sat down with TRT World's Anelise Andrade Borges.

In 2016, Brazil made international headlines for all the wrong reasons. How would you describe what's happening in the country?

Luiz Inacio Lula da Silva: In 2014, we [the Workers' Party, or PT by its Portuguese acronym] won the election for the fourth consecutive time. That's when some things happened. Things that shouldn't have happened. We began having a difficult time fixing some things that needed fixing. Some adjustments needed to be made following a high number of tax breaks.

The tax breaks were introduced [during Rousseff's first term as president] from 2011 to 2014 to maintain the levels of employment and to preserve our social policies. We [had ended up] giving tax breaks to too many companies. As a result, some workers had been affected. So we noticed there was more money leaving the state coffers than was entering. This wasn't happening because the government was spending too much, it was because the government had allowed too many exceptions. The government was simply giving back some of the taxes to businesses.

President Dilma [Rousseff] put forward an adjustment proposal. This adjustment couldn't be negotiated with the workers [and so] it was poorly received, and from then on we experienced a negative cycle. [NOTE: Rousseff struggled to push through reforms to end the extensive tax breaks in early 2015, which she argued was a necessary step at a time when the Brazil economy took a serious turn for the worse. After two prosperous decades, falling commodity prices had a dramatic impact on Brazil. But Rousseff faced fierce hostility from conservative lawmakers, who pushed for cuts to be made to social welfare programmes instead.]

An economic [downturn], in my opinion, is always the most serious thing because when the economy isn't doing well you have fewer jobs, lower salaries, fewer dreams and less hope. Because of this decline, another serious thing that happened was that President Dilma's [popularity received a battering]. The right, the conservatives, felt as though they could rip up the constitution and remove the president.

That is when the impeachment against President Dilma began, based on the false accusation [that] the president had spent money from public banks without reimbursing it. And that's something that had been done before by every government in the history of Brazil. [NOTE: Rousseff is accused of using state-controlled banks to finance social welfare programmes, allegedly in violation of Brazil's fiscal and budget laws.]

Then, because they had a majority, the conservatives passed the article of impeachment in both houses of Congress, voting to remove the president.

As a result, Brazil currently lives under a parliamentary coup that is a shame for the country.

This has also been a difficult year for you. You have been linked to Brazil's largest corruption scandal; you're a defendant in three criminal investigations; last week, new accusations emerged. Are you surprised that this keeps happening? What is your reaction to the latest accusations?

LS: I believe that I react to this as any human being would… First of all, I am at peace because I am conscious of what I did during my time in power. Secondly, I'm under the impression they don't want to make me [as an individual] a criminal, but rather they want to criminalise my government. They want to criminalise everything we did.

Now these latest accusations are about the Swedish fighter jets which Brazil purchased [in a deal reached in 2013]. It is so absurd, so absurd… For a prosecutor to make such an accusation, he is either illiterate, or he's acting in bad faith, or he's got a bad character. He can't be a normal person.

So I'm outraged as a human being, [but] at peace as a politician – well aware of the things I did. And they must know that if I come back [to power] I'll do the same, or I'll do more and better.

So your criticism has to do with the way this investigation is being conducted?

LS: I criticise the way this is being conducted and the amount of lies that they tell every single day.

Your lawyers have appealed to the United Nations, and have filed a petition with the human rights committee. What do you expect will happen next?

LS: The petition just aims to launch an international debate in such an important institution as the UN office in Geneva. Just so it becomes clear there's no one above the constitution.

I am not looking to get in the way of Judge Sergio Moro's work [NOTE: Moro is the federal judge and anti-corruption campaigner who led the legal campaign against Rousseff]. But what he can't do is think of himself as [someone] who will solve all the problems of humanity while disrespecting democratic criteria, legal criteria, human rights criteria. The only thing I want is for him to do things in accordance with the law and not declare himself to be the king of kings.

Let's now talk about the impeachment process against your protege and successor, Dilma Rousseff. Her supporters – and you – described her impeachment as a coup. How can it be a coup? Considering that the Brazilian constitution foresees impeachments, and the process was overseen by the Supreme Court?

LS: It's in the Brazilian constitution that any political party or any group of individuals in the society can file an impeachment process against a president.

In [Rousseff's] case, there was no crime of responsibility. But when you constitute a parliamentary majority there comes a moment when you don't need to prove anything. The truth doesn't prevail. What prevails is the will [of the majority].

You say that what happened was a process limited to the congress. But I was here and I saw hundreds of thousands of Brazilians take to the streets to demand her ouster. How do you explain such a lack public support?

LS: It is true that a lot of people didn't want president Dilma. But they also didn't want [Michel] Temer [NOTE: Temer is the former Vice President, who took over as president].

What the people thought was that they would remove Dilma and there would be new elections. Which is what we believe should happen.

Brazil can't spend 2017 and 2018 in this situation with a president as unpopular as Temer.

I think the best solution now is for political parties to discuss a constitutional amendment and recover the right for people to choose their president through a direct vote.

A recent poll revealed that 63 percent of Brazilians want Temer to resign by the end of the year. Do you think this can happen?

LS: If it's up to the government, no. Look, I had conversations with Michel Temer when he was Vice President.

Temer is a constitutional lawyer. He knows what happened was a coup. He knows Dilma's [Rousseff's] removal was exclusively a political maneuver. He knows this. And he has confessed this to many people. But he decided to participate. Because I think he saw in the coup the only opportunity for him to become the president of the republic.

So someone who agrees to become the president through a coup, through a parliamentary maneuver based on a crime that didn't happen, will not voluntarily abandon the position so that new elections can take place. I think the Brazilian people will have to make a lot of effort, organise a lot of protests, a lot of political alliances, so that this can happen.

Let's talk about the media now. As a Brazilian national, I followed the national media coverage of this political scandal closely, and it became very clear that the Brazilian media was not impartial. It got to a point where journalists would invite people to join anti-Rousseff protests… What kind of role did that play in this crisis?

LS: It contributed a lot. The truth is that the behaviour of the media in Brazil is not very democratic.

You have 3 magazines, 4 main Brazilian newspapers and the main TV channels' news bulletins – and I won't even speak about the internet coverage – that worked really hard to sell negative things about the president [Rouseff].

And now the same vehicles are trying to push positive things about the current government. Things the people know [are untrue].

You speak of how Brazilians have lost hope. Could you restore that? What are your plans for 2018? Will you run for office?

The situation in Brazil at the moment is the following: the national government can't do anything; state governments are out of cash, and many won't be able to pay salaries in December; municipal governments are all out of cash, banks aren't lending money – not private banks nor public banks; businessmen aren't investing because they don't trust politics, and foreign investment is barely coming, and not creating any jobs…

So how can the economy work if all those who are responsible for making it work are paralysed?

LS: It's quite possible that I will think about this again when the right moment comes. I have the conviction, having done everything that I did, that it is possible to get good people together to fix Brazil. 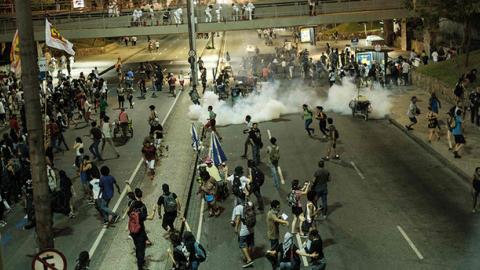