Kashmir has been in a state of military lockdown for over 100 days. Despite scores killed and wounded, many Kashmiris see resistance and independence as the only end in sight.

This summer while visiting my parents in South Kashmir, I was caught in a confrontation between Indian soldiers and Kashmiri protestors. Struggling to find my way to safety, I found myself in the front yard of a house where a group of women was anxiously peering over the wall. "They may blind our children with their pellet guns, but it is India that has lost all eyesight," a woman told me, handing me a glass of water, as we both wiped tears off our faces.

She was worried about her son, who was protesting in the street. Indian soldiers were shooting straight at people, yet she could not bring herself to prevent her son from going outside. As the thick fumes from exploding teargas shells wafted into the front yard, she said: "How will I face the mothers whose children have been killed?" Then added, solemnly, "It is now or never."

Days earlier, I had heard about the death of a young man, Aamir Nazir, from a nearby town. Aamir was a twenty-two-year-old student who had come home for vacation. He had been watching a protest from across a river when soldiers shot at him. As his relatives were taking him to a hospital in Kashmir's capital Srinagar thirty-five miles away, soldiers waylaid them and attacked them mercilessly. By the time his limp body reached the hospital, Aamir had lost too much blood.

On his Facebook profile, his posts all spoke of peace and love for the world, interspersed by Jalal-ud-din Rumi's poetic verses and light banter with his friends.

"His body was perforated in so many places that all attempts at a transfusion failed," a volunteer at the hospital would later tell me.

The bloody summer in Kashmir that began on July 9th this year, when Indian forces shot dead a dozen Kashmiris mourning the death of a young guerilla commander Burhan Wani, is well encapsulated by the desperation of the Kashmiri woman and the casual killing of Aamir Nazir.

The generalized and routine nature of state violence in Kashmir has pushed Kashmiris to the wall and made their lives precarious. For over a hundred days now, Kashmir has been under military lockdown. Close to a hundred people have been shot to death, more than ten thousand are injured, and five thousand languish in jails.

The weapon of choice for the Indian forces has been the high-velocity lead pellet guns, which have fully blinded as many as 200 people and left around 1000 others partially blind. On Indian TV, experts debate the merits and demerits of using pellet guns on Kashmiris: "If we don't use pellets, we will have to use bullets," I hear them say.

They have used pellets, bullets, and much more.

A communication blockade has accompanied the lockdown. The Internet has been shut down and mobile phones remain out of service. Kashmiris have been left with no way to tell their stories. A newspaper deemed critical of the state was banned. In some places, people have barricaded electricity transformers to prevent soldiers from disrupting the power supply. Soldiers roam neighborhoods like vandals and damage people's homes and vehicles. The government's assault has been no less than a declaration of war on a defenseless population.

Regional politics on the backs of Kashmiris

Kashmiris have historically demanded independence from India. This demand is intensified by the threats Indian nationalism poses to Kashmiris. India wants to assimilate Kashmiri territory permanently. The dominant strains of Indian nationalism—inflected by Hindu majoritarianism—would prefer to see Kashmir's majority Muslims either subdued into a subject population, demographically neutralized, or even completely evicted.

With the rise of the hard-right government in India in recent years, such scenarios have appeared more likely than ever before. The Narendra Modi-led government in New Delhi brooks no negotiations with Kashmiris over their political rights. India sees Kashmiri protests as a "law and order" problem instead of a political struggle for the right to self-determination.

While the Indian state has long been inured to outside criticism over its violence in Kashmir, internationally the criticism has also become muted. The Western media sees India as a vast market for Western goods and investments, as well as a local bulwark against China, a role India is happy to play.

Riding on the wave of global Islamophobia, India links the independence movement in Kashmir with terrorism and presents itself as a victim in Kashmir rather than as an aggressor. In all this, Indian politicians and media inflate Pakistan's support to Kashmiris and use war-like behavior along the border with Pakistan to deflect attention from its suppression of Kashmiris. Domestically, India silences the critics of its policies in Kashmir through invocation of sedition laws and by subtly instigating personal violence against anti-occupation activists.

On its part, Pakistan has been unable to understand the current moment in Kashmir fully. Instead of unequivocally supporting Kashmiri independence and putting Kashmiri aspirations front and center, it has harked back to its "traditional stance" of framing the issue as an "inter-state dispute." To be fair, Kashmiri resistance leaders are no less to blame for sending out ambiguous signals to Pakistan. Some in Kashmir fear the loss of Pakistan's support so much that they have consistently tried to muddle the desire for independence in Kashmir with the slogans of "merger" with Pakistan. Kashmiri leaders have been unable to find even a simple symbol like a shared flag that could represent the people's struggle and their desires.

The odds are stacked against Kashmiris. It is indeed only the remarkable tenacity of the people that keeps the resistance alive. Presently, Kashmiri resistance leaders could at least put forth a consistent vision and a program, which could include a full commitment to independence, a democratic broadening of the movement to substantively include religious minorities and regional populations, as well as supplying people with unifying symbols like a flag to represent the Kashmiri struggle for freedom.

Many state experts have told Kashmiris that independence is utopic and a pipedream. One could argue that the only utopian fantasy is the one which believes the status quo will continue forever. There are rumblings of change already taking place. Hard-right nationalism in India is the last refuge of the scandalous socio-economic system that has prevented the historically marginalized and dispossessed tens of millions in India from seeking their full rights. The war-mongering, nuclear brinkmanship, and aggression in Kashmir is not a sign of India's strength, but of how brittle the power of its traditional ruling elite has become.

It is clear militarism in the subcontinent has been a very expensive and a highly volatile venture. It may benefit some to keep Kashmir under a colonial-style occupation, whip up a nationalist frenzy to buttress it, and take resources away from feeding the hungry multitudes in order to purchase toys of war. But for most, it is a losing proposition.

Four days before his death the young Aamir Nazir had wished all his friends, including his Indian friends, a peaceful and prosperous Eid. His death is just another piece of evidence of how freakishly banal India's military occupation in Kashmir has become. It runs roughshod over beautiful lives. The peace and prosperity Aamir hoped for all will never come from an obsessive compulsion to control Kashmir, but only through Kashmir's freedom. 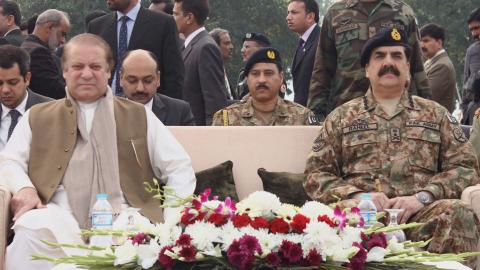 What's behind the targeting of a journalist in Pakistan?