Why is Germany granting asylum to children and ignoring the rest?

1
Remembering Srebrenica – memory and forgetfulness
2
The US Declaration of Independence demands Americans abolish the police
3
Against polarisation: The politics of gratitude in Cyprus

As Berlin prepares to resettle "an appropriate share" of Syrian children, it remains to be seen whether these young minds will be disassociated from their parents and cultures entirely as they are integrated in their host country.

Every effort to alleviate the suffering of the world’s refugees is laudable. Although Europe has largely avoided the problem by closing its borders and even Greece recently applied brute force to keep war-affected refugees at bay, Germany has performed admirably on that front.

But the picture is complicated. The country will select 1,500 children identified as being particularly in need (unaccompanied minors under the age of 14 and those in need of urgent medical assistance), and grant them asylum, of whom most are set to be girls. Thus far, France, Portugal, Luxembourg, and Finland have reportedly offered support for the initiative.

While the figure of refugees to be taken in pales in comparison to the scale of the global refugee crisis, and the tens, if not hundreds of thousands now said to be present at the Greek-Turkish border, any good news on the plight of refugees around the world is rare and must be celebrated where it occurs.

That the most recent announcement concerns the most vulnerable, the children of Syria, many of whom have perished across the course of the civil war, in some cases frozen to death in makeshift camps as they fled regime and Russian aerial bombardment, makes it all the more commendable.

However, two pressing concerns for further consideration emerge: the future of the various refugees and migrants who will not make the cut, and the future of the selected children to be graciously taken in. On the latter, assuming their parents or next of kin are alive, will the children be reunited with their families? Will the families join the children in Germany and beyond? Will these young minds be disassociated from their cultures entirely as they are integrated into their host country?

Integration is a long process, but what counts as successful integration against whatever ‘standard’ that success is measured against, constitutes an important point of debate.

The successful integration of refugees is of course desired by each and every host country. Though financial burdens in the short-term may be high, given the opportunity (like everyone else), in the long-term former refugees can be net contributors to host economies, improving local labour conditions, adding to entrepreneurial capital, and helping to assuage the effects of ageing demographics. Refugees taken in by Germany are not likely to forget the opportunities at a better life afforded to them by the German state. But quantitative integration aside, with cultural integration, would it be the case that these young Syrian children will have to forgo their heritage and assume another?

Meanwhile, for all the accusations that Turkey had ‘weaponised’ refugees to instigate collective action against the motor that has generated millions of refugees and internally displaced in Syria – the Assad regime and its patrons – refugees have been thoroughly ‘weaponised’ in the domestic political sphere in Europe for years as a point of party politics, particular come election time, and perhaps as a result of the sensitive nature of issue across the political spectrum. The rise of the right-wing Alternative for Germany (AfD) party in Germany, or the purchase of anti-EU populism across Europe, is often explained by the exploitation of fears and stigmas associated with immigration. Already, the idea that the intake of 1,500 children would spark a new wave of migration, or that the rest of the Union would be ‘let off the hook’, that the gesture violates norms, has curiously been voiced.

Neither is the weaponisation of refugees, or to give it a more appropriate and less sensational name, the ‘politicisation’ of refugees, endemic in any way to Europe. Regardless of motive and abstraction, what could possibly be more important or necessary than the cessation of Assad’s aggression? Anything less seems to be little more than a temporary patch.

EU Foreign Policy Chief Josep Borell recently asserted that the EU could “not accept that migrants are being used as a source of pressure”. Beyond the fateful distinction to be made between migrants and refugees, Borell’s remarks beg the question of just exactly how much more the Syrian people must suffer for the EU to take preventative methods, including that of a no-fly-zone the Dutch Foreign Minister had voiced.  Perhaps the real cynicism and reductionism is to be found in the fact that the refugee issue seems to be the only possible source of motivation for the EU, the only lever left to pull to avert what the UN warned is the biggest “humanitarian horror story of the 21st Century”.

If anything, that the move triggered a renewed debate across Europe on the catastrophe that has been the Syrian Civil War, and that 1,500 children will now be saved, is but a small example of how the refugee fallout could have better been dealt with, and of how, despite the means, some action has now at the very least, been taken. 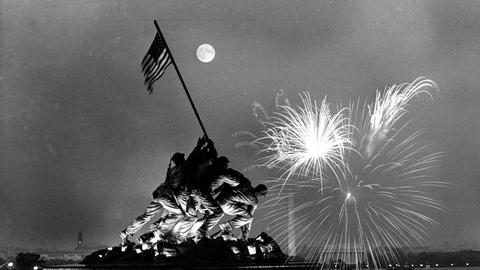 The US Declaration of Independence demands Americans abolish the police

Could Europe revise its relations with Israel over annexation plans?

Has the American smile gone forever?

1
Remembering Srebrenica – memory and forgetfulness
2
The US Declaration of Independence demands Americans abolish the police
3
Against polarisation: The politics of gratitude in Cyprus