Türkiye's joint steps taken with the Mogadishu government in the last decade have helped Somalia revitalise, as the country was on the brink of collapse, Turkish President Recep Tayyip Erdogan has said.

"In 2011, Somalia was on the brink of collapse as the international community articulated."

"So in 2011, we paid an official visit to Somalia with a large delegation to extend a message to the world that we are standing with our Somali brothers and sisters," Erdogan told a news conference held with his Somali counterpart Hassan Sheikh Mohamud at the capital Ankara on Wednesday.

Noting that the joint steps taken with Somalia have aided the country to revitalise and develop even further, Erdogan said the bilateral trade volume between reached $363M last year, which was only at $2M in 2003.

Türkiye's largest embassy building in the world is located in the Somali capital Mogadishu, Erdogan said, adding that his country is proud of it.

Turkish Airlines was the first international carrier that began operating in Somalia after a long civil war erupted in the Horn of Africa country in 1990.

Türkiye has expanded its support to Somalia in every field, starting from health care services to education and infrastructure development, he noted.

The humanitarian aid to Somalia in the last 10 years surpassed $1 billion, Erdogan noted, saying Türkiye will continue to develop its relations with the African continent and enhance its cooperation.

"Until now, we have completed the training of 1,000 special police officers in Somalia. As the Republic of Türkiye, we are determined to give our support in its fight against terrorism," Erdogan added.

For his part, Mohamud thanked the Turkish nation for its investments in Somalia, expressing appreciation to Türkiye and its people for the endeavour and efforts about the humanitarian situation his country has been facing. 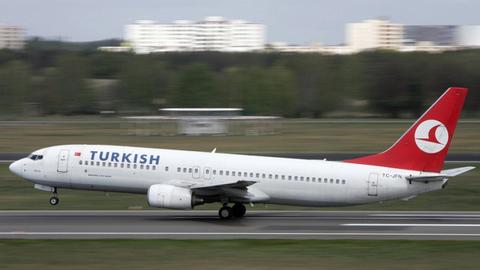 Turkish Airlines is not up for sale: spokesman