The Turkish government called out the EU for not naming the terror organisations responsible for carrying out the deadly attack on civilians in northern Syria's Afrin region.

On Tuesday, a bomb-rigged fuel tanker exploded in the centre of Afrin, northwestern Syria, close to Turkey's border.

The EU condemned the terrorist attacks carried out by YPG/PKK members in Afrin on Tuesday, saying in a statement: "Such intolerable acts of terrorism can never be justified. Those responsible must be held accountable.”

However, despite calling the incident a terrorist attack, in which at least 40 civilians were killed, including more than 10 children, and 50 others injured, the EU never mentioned the YPG/PKK.

The EU's condemnation wasn't fair in the eyes of Turkey. Fahrettin Altun, Turkey's presidential communications director, criticised the EU for being soft on terrorism and not taking a reasonable stand against the PKK and its affiliates that are engaging in the acts of terrorism, particularly targeting Turkey.

Altun lashed out at the EU for not identifying the terror groups responsible for the Afrin attack in its official statement of condemnation.

"Despite all our warnings so far, those who supported and armed the YPG/PKK and tried to give it legitimacy and allowed the terrorist organisation to operate in their countries are among those primarily responsible for the massacre in Afrin," he said, adding that those who shy away from naming the perpetrators of such attacks harm the global fight against terrorism.

"A ceasefire call is never made to terrorist organisations. Terrorism is condemned and terrorism is fought," Altun said.

Turkey has slammed the EU’s stance on the PKK terror group on several occasions in the past.

Last year, Turkish officials called on the EU to increase cooperation against terrorism, asserting that their fight should not be limited to Daesh only, but also include groups like the PKK and YPG.

But Turkey's Deputy Foreign Minister Faruk Kaymakci pointed out at the Turkey-EU joint consultative committee last year that the European bloc was turning a blind eye to the illicit activities of the PKK despite it being included in the EU list of terror groups.

"It [the PKK] is able to carry out campaigns in several EU countries, recruit people and make money. The EU should do more than just declaring the PKK as a terrorist organisation," Kaymakci said.

Much to the dismay of Turkey and human rights observers, the European Parliament has repeatedly held events in which some of the ringleaders of the PKK terror group and their supporters participated.

The Turkish government has notified the EU on several occasions that the PKK was misusing its land and resources to spread a massive anti-Turkey propaganda campaign, but the bloc never paid any heed.

In February, the European Parliament entertained several members of the PKK and many of them were the EU's terrorism list. During the scandalous event, open threats were made against Turkey and its President Recep Tayyip Erdogan. On this, Turkey’s presidential spokesman, Ibrahim Kalin also criticised the EU.
“It is an embarrassing scandal that a blind eye was turned to the open spreading of terrorist propaganda and Turkey and President Erdogan were insulted at a conference organized by the European Parliament,” Kalin said.

Kalin said that those who ensure that blood-shedding terrorists hold talks under the roof of the European Parliament became part of the offence. 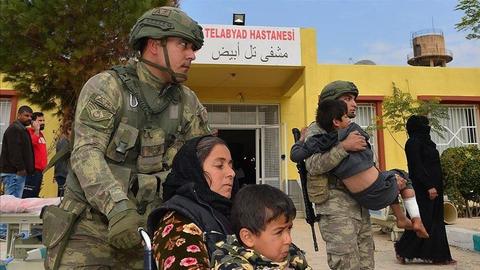