Russia: US sanctions will not hurt our ties with Turkey

Russian Foreign Minister Lavrov has said Moscow plans to further military cooperation with Turkey. He was speaking at a press conference in Sochi with Turkish Foreign Minister Mevlut Cavusoglu who announced plans for $100B in mutual trade.

Russian Foreign Minister Sergei Lavrov has said Moscow and Ankara's military cooperation would not be deterred by the United States imposing sanctions on Turkey earlier this month for acquiring a Russian missile defence system.

Cavusoglu told the joint news conference that Turkey's relations with Russia are not an alternative to its ties with NATO and the European Union.

Turkey requested more information from Russia about the vaccine and Health Minister Fahrettin Koca informed the presidential cabinet on Monday that everything was on the right track, Cavusoglu added. 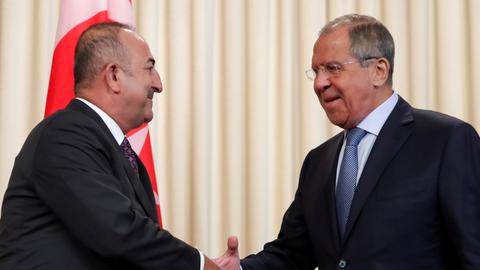 'Military solution in Idlib would be a disaster' — Cavusoglu