Such a decision will be "null and void" for us, Hami Aksoy said in a statement.

"Nobody should doubt that we will give the necessary response if it dares [to do so]," Aksoy said after the Greek Cypriot administration reportedly issued an arrest warrant for employees of the drillship and officials of companies, which cooperate with the Turkish Petroleum Corporation (TPAO).

"We will also initiate the necessary counter-legal processes together with our related institutions," he noted.

Quoting the Greek Cypriot daily Phileleftheros, it said, "Greek Cyprus obtained the personal data of the employees of Fatih drillship working 36.5 nautical miles off the coast of the western city of Paphos in the Mediterranean."

"There are British and Turkish nationals working on the Fatih drillship, in addition to TPAO's cooperation with two American and one Croatian company with expertise in drilling," Sabah reported.

Meanwhile, Aksoy said attempts to halt Turkey's works on its own continental shelf by such futile methods "will yield no results."

"Turkey will decidedly continue maintaining petrol and natural gas exploration/drilling works as planned in order to protect the rights of both their own continental shelf and the rights of Turkish Cypriots, who are the equal partners of the Island," Aksoy added.

Turkey wants to see energy as an incentive for a political resolution on the island and peace in the wider Mediterranean basin rather than a catalyst for further tensions.

In 1974, following a coup aimed at Cyprus' annexation by Greece, Ankara had to intervene as a guarantor power. In 1983, the Turkish Republic of Northern Cyprus (TRNC) was founded.

Several attempts to resolve the dispute since then have ended in failure. The latest one – held with the participation of guarantor countries Turkey, Greece and the UK – ended in 2017, in Switzerland.

Turkey's first seismic vessel, the Barbaros Hayrettin Pasa, bought from Norway in 2013, has been conducting exploration in the Mediterranean since April 2017. 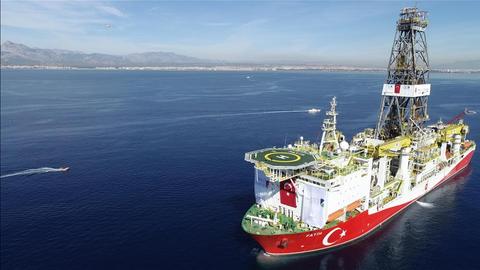