The massacre has caused public outcry in Turkey, as political figures and local authorities vow to fight terrorism.

Funeral services have been held across Turkey for 13 citizens who died in a brutal massacre in northern Iraq.

Turkey announced on Sunday that 13 Turkish citizens had been massacred by the PKK terror group in Iraq's Gara region. The attack evoked public outcry, with attendees of Monday's funerals chanting slogans against terrorists.

Gendarmerie Private Suleyman Sungur, 27, was laid to rest in his hometown in the southeastern Siirt province.

His mother Sirin and father Salih were present in the ceremony, which was attended by the provincial gendarmerie commander, General Arif Cetin, as well as other officials and citizens.

Following the funeral prayer, citizens chanted slogans against the PKK, calling for its end.

On Sunday, Turkish National Defence Minister Hulusi Akar said the bodies of 13 Turkish citizens were found during Operation Claw-Eagle 2 in the Gara region of northern Iraq.

Turkey launched the operation on February 10 to prevent the PKK/KCK and other terror groups from reestablishing positions used to carry out cross-border terror attacks.

Operations Claw-Tiger and Claw-Eagle were initiated last June in northern Iraq to ensure the safety of people and Turkey’s borders.

In the southeastern Adiyaman province, a funeral ceremony was held for Aydin Kose, another victim of the PKK.

The ceremony held in the Kahta district was attended by Agriculture and Forestry Minister Bekir Pakdemirli, along with local officials and many citizens.

“Our country will remain determined,” Pakdemirli told the crowd, adding counterterrorism efforts will go on until the last terrorist is neutralised both at home and in neighbouring countries.

“You cannot divide this country. We are not crying […] We will not make the PKK terror group happy," Kose's cousin said.

Another funeral ceremony was held in southeastern Mardin province for police officer Vedat Kaya. He was buried in the Artuklu district.

The crowd there chanted slogans against the PKK terrorists and praised the massacre victims.

Kaya was kidnapped by the terror group in July 2016 when he was en route to southeastern Diyarbakir’s Lice district together with his family.

Vedat Kaya's father prayed for the country and pledged to protect the Turkish flag.

In the Black Sea province of Samsun, Muhammet Salih Kanca, 38, was given a burial service in Ilkadim district.

In Kahramanmaras, another southeastern province, Air Defence Specialised Sergeant Huseyin Sari was laid to rest in a ceremony attended by his parents Hasan and Bedia Sari, as well as siblings Ramazan and Hatice Nur Sari.

Among the attendees also were Energy and Natural Resources Minister Fatih Donmez, local and military officials, and political figures.

The victim's brother Ramazan, who is serving as a soldier in eastern Malatya province, attended the ceremony in his military camouflage.

Sari was kidnapped by PKK terrorists in August 2015 from a passenger bus on Diyarbakir-Bingol highway.

Gendarmerie Private Sedat Sorgun, 35, was buried in his hometown in eastern Erzurum province. Citizens who attended the funeral service also condemned the PKK.

Among other attendees at the funeral were deputy ministers, military and local officials, political figures, and many citizens.

Sorgun was kidnapped in August 2015 when he was serving in the eastern Van province’s gendarmerie command.

He was stopped on Diyarbakir-Bingol highway and abducted by the PKK.

Father of three among victims

Police officer Sedat Yalabak was also one of the victims. A funeral ceremony was held for Yalabak in southern Mersin province’s Bozyazi district.

Yabalak’s mother Unzile, father Kadir, wife Burcu, daughter Zeynep Sena, and his brothers were present at the ceremony. The service was also attended by Interior Minister Suleyman Soylu, Deputy Foreign Minister and Director for EU Affairs Faruk Kaymakci, as well as other local and military officials, and citizens.

His seven-year-old daughter wore a police uniform in the ceremony and saluted her slain father.

Yabalak, a father of three, was kidnapped by the PKK terrorists in 2015 when he was en route to the southeastern Sanliurfa province with his family. He was stopped by terrorists in Lice, Diyarbakir.

Umit Gicir, 35-year-old specialised gendarmerie sergeant, was also among the victims. A funeral ceremony was held in his hometown Balikesir in the country’s northwest.

Along with his family and relatives, the ceremony was attended by deputy ministers, local and military officials, political figures, and citizens.

The massacre has prompted a stern response from Turkey, including summoning the US ambassador in Ankara to the foreign ministry following US statement on the massacre, with political figures and local authorities vowing to fight against terrorism until the last one of them is neutralised. 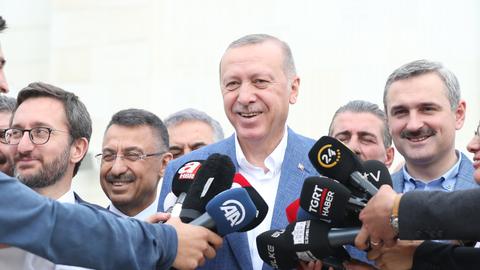