Chaired by Saudi King Salman, who is presiding over the G20 this year, the meeting's purpose was to tackle the pandemic and its economic implications as people lose their incomes amid closures, curfews and lockdowns.

He made the remarks while addressing an extraordinary meeting of leaders of the G20 economic bloc focusing on the coronavirus pandemic.

Via videoconferencing, Erdogan took part in the meeting from Huber Palace in Istanbul.

No country has the luxury of implementing protectionist, unilateral policies, he said.

"I invite all countries to participate in a fair fight against this global health crisis until all humanity breathes a sigh of relief," said Erdogan.

Erdogan urged sharing experiences in controlling the Covid-19 pandemic, including diagnosis and treatment of the disease.

The unusual video call in lieu of a physical gathering comes as governments around the world stress the importance of social distancing to curb the spread of the highly infectious virus.

Chaired by Saudi King Salman, who is presiding over the G20 this year, the meeting's purpose was to tackle the pandemic and its economic implications as people lose their incomes amid closures, curfews and lockdowns.

G20 nations pledged a "united front" on Thursday in the fight against coronavirus, saying they were injecting $5 trillion into the global economy to counter the pandemic amid forecasts of a deep recession.

US President Donald Trump and Russian President Vladimir Putin joined the emergency videoconference chaired by Saudi Arabia's King Salman, who called for coordinated action while facing pressure to end an oil price war between Riyadh and Moscow that has roiled energy markets.

The talks come amid criticism that the G20 has been slow to address the Covid-19 pandemic, which has left more than 21,000 dead worldwide according to official data, and triggered financial shock waves as more than three billion people are locked down.

"We are strongly committed to presenting a united front against this common threat," the leaders said in a joint statement after the summit.

"We are injecting over $5 trillion into the global economy, as part of targeted fiscal policy, economic measures, and guarantee schemes to counteract the social, economic and financial impacts of the pandemic."

As concerns mount for poorer countries without access to capital markets or adequate health facilities, G20 leaders also pledged to work with bodies such as the International Monetary Fund to deploy a "robust" financial package to support developing nations.

"It is our responsibility to extend a helping hand to developing countries and (the) least developed countries to enable them to build their capacities and improve their infrastructure to overcome this crisis and its repercussions," King Salman said.

The world's 20 most industrialised countries are scrambling to defend their virus-wracked economies amid forecasts they will likely plunge into a recession.

On Wednesday, the financial ratings agency Moody's estimated the G20's overall gross domestic product would contract by 0.5 percent this year, with the US economy shrinking by 2.0 percent and the eurozone by 2.2 percent.

In a final statement after the meeting, the G20 said they were committed to strengthening the World Health Organization’s mandate. They said “global action, solidarity and international cooperation” were needed more than ever, but made no specific commitments.

“The unprecedented Covid-19 pandemic is a powerful reminder of our interconnectedness and vulnerabilities," the group said. “The virus respects no borders."

“This is exponential growth and only the tip of the iceberg,” Guterres said, adding that countries must be able to combine systematic testing, tracing, quarantining and treatment, as well as coordinate an exit strategy to keep it suppressed until a vaccine becomes available.

UN spokesman Stephane Dujarric said later that the secretary-general “thought the meeting was an important step in the right direction, but there’s still a long way to go for truly concerted and effective global leadership in response to this pandemic and its impact.”

This week, French President Emmanuel Macron and his Chinese counterpart Xi Jinping pushed for an emergency G20 summit to limit the impact of the pandemic.

The lack of immediate action stood in contrast to the 2008 financial crisis, when the group quickly swung into action to mobilise assistance for vulnerable countries.

Talk of global coordination has yet to resonate under Trump's isolationist presidency.

On Wednesday, US Secretary of State Mike Pompeo took aim at China, saying the top diplomats of the Group of Seven agreed with him that Beijing was waging a "disinformation" campaign about the pandemic.

At the G7 talks, a day before the G20 summit, Pompeo alleged Beijing was engaged in a social media campaign that included conspiracy theories that the US was behind the virus, which was first detected in the Chinese metropolis of Wuhan.

"If G20 leaders can put politics aside and reach a collective G20 agreement, countries have a better chance of success or of delivering more stimulus than on their own," Markus Engels, from the Global Solutions Initiative, a network of think tanks, told AFP.

"Coordination among the G20 sends a strong message of unity and confidence, both of which are urgently needed now."

Crude oil prices — hammered by the outbreak's impact on demand as well as by a price war between Saudi Arabia and Russia — were also expected to be at the centre of the discussions.

Riyadh faces pressure from Washington to row back on its decision to hike production and offer the biggest price cuts in two decades, in retaliation for Russia's refusal to tighten supply as the virus sapped demand.

However, the Kremlin said "the oil topic" was off the table.

Russian President Putin on Thursday called for sanctions relief during the coronavirus pandemic, telling G20 leaders it was a matter "of life and death."

The leader did not specify which countries should be earmarked for sanctions relief, speaking instead more broadly.

"Ideally we should introduce a ... joint moratorium on restrictions on essential goods as well as on financial transactions for their purchase," Putin said at a virtual meeting of G20 leaders on Thursday.

"I am talking about the countries that are suffering the most from this pandemic. At the end of the day, it's a question of life and death, this is a purely humanitarian issue."

"These matters should be freed of any politics," Putin added.

Russia has been chafing under numerous rounds of Western sanctions following the annexation of Crimea in 2014 and its role in the Ukraine crisis.

It is also an ally of a number other countries sanctioned by the West, namely Iran and North Korea.

The Kremlin chief said it was important to establish "green corridors free of trade wars and sanctions" that would ensure supplies of medication, food, equipment and technology.

Putin also predicted the current crisis would be tougher than the financial crisis of 2008-2009 and trade conflicts and sanctions would only exacerbate it.

"We undoubtedly cannot afford to act on the principle 'every man for himself'," the Russian president said, adding that countries needed to join forces in developing vaccines and drug treatments.

The coronavirus and a steep drop in oil prices have caused a two-pronged crisis for the Russian economy, challenging Putin's promises to boost growth and raise living standards.

Britain pledged on Thursday to contribute $253 million (210 million pounds) to the international coalition to find a vaccine against coronavirus, which it said made it the biggest contributor.

Announcing the commitment after a virtual summit with other G20 leaders, Prime Minister Boris Johnson called on governments to work together to create a vaccine as quickly as possible and make it available to anyone who needs it.

"My call to every G20 country and to governments around the world is to step up and help us defeat this virus," Johnson said in a statement.

The British funding is being channelled to the Coalition for Epidemic Preparedness Innovations (CEPI), which has said it requires an additional $2 billion in funding from governments to develop the crucial vaccine.

"If all G20 governments pledged $100 million funding, this shortfall would be met instantly," the British government statement said.

Economists say the restrictions imposed around the world to fight the virus could cause the most violent recession in recent history.

"The G20 economies will experience an unprecedented shock in the first half of this year and will contract in 2020 as a whole," ratings agency Moody's said.

Unemployment rates are expected to soar — as much as 30 percent in the US, according to James Bullard, president of the St Louis Federal Reserve.

"We think the unemployment rate in the eurozone will surge to about 12 percent by the end of June, giving up seven years' worth of gains in a matter of months," said David Oxley of London-based Capital Economics.

Leaders of the G20 major economies will hold a virtual huddle later on Thursday in the shadow of such dire predictions.

"As the world confronts the Covid-19 pandemic and the challenges to healthcare systems and the global economy, we convene this extraordinary G20 summit to unite efforts towards a global response," tweeted the king of Saudi Arabia. Saudi currently holds the rotating G20 presidency.

WHO chief Tedros Adhanom Ghebreyesus said richer nations needed to offer support to low and middle income countries, including those in Sub-Saharan Africa.

The devastating effect on poorer countries was laid bare on Thursday, when the Philippines announced that nine frontline doctors had died after contracting Covid-19.

Three large Manila hospitals said this week they had reached capacity and would no longer accept new coronavirus cases.

The death toll from the virus, which emerged in China late last year, continued to grow, with the US becoming the sixth country to hit four figures.

At least 1,050 people are now known to have died in the United States, with almost 70,000 confirmed infections, a tally by Johns Hopkins University showed, while globally the number of infections is closing in on half a million.

The rocketing infection rate in the US has sparked a rush to buy weapons, gun store owners told AFP, with customers panicking about social breakdown.

"A lot of people are scared that someone is going to break into their home ... to steal cash, their toilet paper, their bottled water, their food."

Around half of the US population is under lockdown, but President Donald Trump said he would decide soon whether unaffected parts of the country can get back to work.

"We want to get our country going again," Trump said. "I'm not going to do anything rash or hastily.

"By Easter we'll have a recommendation and maybe before Easter," said Trump. 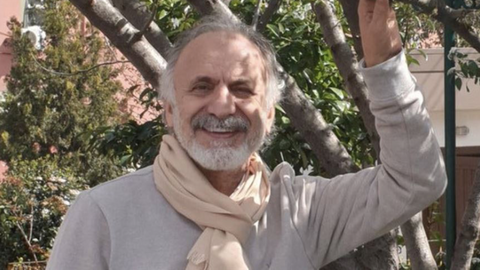