The Netherlands is preparing a case against Syria at the UN's highest court, seeking to hold the Syrian regime leader Bashar al Assad accountable for human rights violations, including torture and the use of chemical weapons, the Dutch foreign minister has told the country's parliament.

Syria has been informed of the legal step, which precedes a possible case at the International Court of Justice, the UN's court for disputes between states in The Hague.

"Today the Netherlands announced its decision to hold Syria responsible under international law for gross human rights violations and torture in particular," Foreign Minister Stef Blok wrote in a letter to legislators on Friday.

It cites Syria's obligation to uphold the UN Convention against Torture, which Damascus ratified in 2004.

The Netherlands decided to take action after Russia blocked multiple efforts at the United Nations Security Council to refer a case on human rights violations in Syria to the International Criminal Court, which prosecutes individuals for war crimes and is also based in The Hague.

READ MORE: Groundbreaking case filed against the Assad regime at the ICC

"The Assad regime has committed horrific crimes time after time. The evidence is overwhelming. There must be consequences," the letter said.

"Large numbers of Syrians have been tortured, murdered, forcibly disappeared, and subjected to poison-gas attacks, or have lost everything fleeing for their lives."

READ MORE: There is as much evidence against Assad as there was against the Nazis 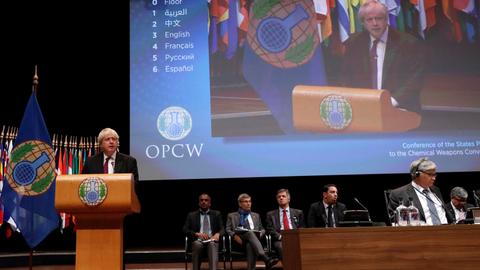