1
Erdogan: Dialogue only solution in eastern Mediterranean
2
UN Security Council at loggerheads over Lebanon peacekeeping operation
3
Schools in Turkey to reopen as planned but remotely
4
Casualties as passenger train derails in Scotland

Turkish Foreign Minister Mevlut Cavusoglu called on the EU to be an “honest broker” in disputes between Ankara and EU member states France, Greece and Cyprus.

Turkey's top diplomat and the EU foreign policy chief have held a joint press conference after a meeting in which they discussed bilateral relations, as well as regional developments.

"Turkey will support the EU's mediation on energy resources in the Eastern Mediterranean as long as it is an honest broker," said Turkish Foreign Minister Mevlut Cavusoglu, following the meeting in the capital Ankara.

He added that Turkey has always been fair and transparent in its relations with the EU and expects the same.

Cavusoglu emphasised that if the EU took additional decisions against Turkey, the country would have no choice but to respond.

Turkey will respond with its own steps if the European Union imposes further sanctions on Ankara, Cavusoglu said on Monday after meeting the EU's top diplomat.

📌Wish to improve our relations w/EU in every field,
📌EU should not uphold political but objective criteria,
📌Should be part of the solution not the problem,
📌Should not let our relations be taken hostage,
📌In case of measures against us, will reciprocate.@JosepBorrellF pic.twitter.com/pXewMVff6P

France's foreign minister said last week EU ministers would discuss Turkey on July 13 and said new sanctions on Ankara could be considered in addition to steps taken over Turkey's drilling in the Cyprus economic zone.

"If the EU takes additional decisions against Turkey, we will have to respond to this," Cavusoglu told a news conference with EU foreign policy chief Josep Borrell in Turkey's capital.

'Need to work together to improve ties'

Josep Borrell said the EU held extensive discussions on Turkey, which he said is a key partner and candidate to join the bloc.

He asserted that relations between the EU and Turkey had become one of the most important issues of EU in terms of foreign affairs.

Borrell added that though it was not the best period in relations, the sides needed to work together to improve ties.

The meeting came in the wake of controversial visits by Borrell to Turkey's neighbour Greece and the Greek Cypriot administration. Ankara has voiced concern on a lack of equitable treatment of itself and the Turkish Republic of Northern Cyprus (TRNC) on issues such as the allocation of Eastern Mediterranean energy resources, as well as on reports of abuse of asylum seekers by Athens.

As relations deteriorated between the bloc and Ankara, the European Union imposed a travel ban and asset freezes on two people in February for their role in Turkey's drilling in Cyprus' maritime economic zone off the divided island.

Cavusoglu berated the EU for failing to fulfil promises and linking issues such as the Cyprus dispute and a 2016 migrant deal. He said Turkey will not allow itself to be held hostage by Greece and Cyprus.

Earlier this year, tens of thousands of migrants tried to cross into Greece via land and sea borders after Ankara said it would no longer stop them.

The flow has slowed since then, but Cavusoglu said Turkey "will continue to implement its decision."

Cavusoglu also repeated a call for France to apologise after an incident between Turkish and French warships in the Mediterranean, which prompted Paris to request a NATO investigation.

Relations between the NATO members have soured over the Libya conflict, where Turkey supports the internationally recognised government and accuses Paris of backing warlord Khalifa Haftar, who tried to capture Tripoli. 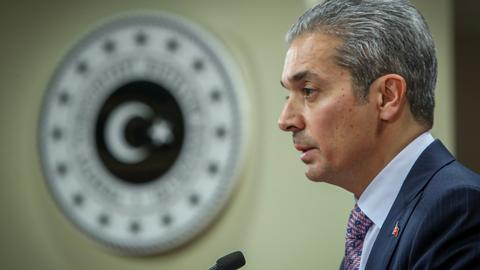 1
Erdogan: Dialogue only solution in eastern Mediterranean
2
UN Security Council at loggerheads over Lebanon peacekeeping operation
3
Schools in Turkey to reopen as planned but remotely
4
Casualties as passenger train derails in Scotland