Turkey has dismissed French allegations as "groundless," insisting its vessels only observed the warship. It has accused the French ship of a "high-speed and dangerous manoeuvre."

Turkey has demanded an apology from France over its depiction of a stand-off between ships from the two countries in the Mediterranean Sea that prompted Paris to suspend its involvement in a NATO naval operation.

“France has not told the truth to both NATO and the EU,” Turkish Foreign Minister Mevlut Cavusoglu said during a visit to Berlin on Thursday.

France says its frigate Courbet was “lit up” three times by Turkish naval targeting radar on June 10 when it tried to approach a Tanzanian-flagged civilian ship suspected of involvement in arms trafficking. The ship was being escorted by three Turkish warships. The Courbet backed off after the confrontation.

At the time, the French frigate was part of the Sea Guardian mission, which is helping to provide maritime security in the Mediterranean.

France said it was acting based on NATO information and that under the alliance’s rules of engagement such conduct is considered a hostile act.

Turkey has denied harassing the Courbet. Both countries are NATO allies.

“The claims that our vessels locked onto (French vessels) are not true,” Cavusoglu added. “We have proven this with reports and documents and gave them to NATO. NATO saw the truth.”

“Instead of engaging in anti-Turkish activities and such leanings, France needs to make a sincere confession,” Cavusoglu said.

“Our expectation from France at the moment is for it to apologise in a clear fashion, without ifs or buts, for not providing the correct information.”

The French government sent a letter on Tuesday to NATO saying it is halting its participation in Sea Guardian “temporarily.”

France has repeatedly accused Turkey of violations of the UN arms embargo on Libya and branded the Turkish government as an obstacle to securing a ceasefire in the North African nation, which Turkey firmly denies. Turkey accuses France of supporting Libyan warlord Haftar and therefore acting as a roadblock to peace.

German Foreign Minister Heiko Maas, speaking alongside Cavusoglu, said “it is extremely important that relations between France and Turkey are constructive” because the countries need to work together on many issues.

He said he hopes that “a constructive, open and very transparent dialogue” will be possible in the coming days and weeks to address their differences.

The spat is the latest flare-up between the two countries which have exchanged barbs in recent days over their roles in the conflict in Libya.

Ankara supports the UN-recognised Government of National Accord (GNA) in Libya against Haftar and his militias.

Germany will keep reviewing travel advice for Turkey, Foreign Minister Heiko Maas told his Turkish counterpart, saying any decisions were coordinated with the EU and based on reliable data on infections and health situation.

On Tuesday, EU members decided to lift travel restrictions initially for 15 countries, including Canada, Algeria, Tunisia, Serbia, Rwanda, South Korea and Thailand, after a long debate among the member states.

The EU’s decision drew criticism from Ankara, with Turkish officials stressing that their country, which has successfully managed the pandemic process, should have been included in the list.

Speaking to reporters after talks with Cavusoglu in Berlin, Maas said reviews of the situation took place every two weeks.

"Further steps will follow," said Maas, adding that family visits were excluded from the travel warning. This is crucial for the large Turkish community but Germany is also an important source of tourism for Turkey.

"This is about how we guarantee safe tourism in the corona crisis," said Maas, welcoming the latest information on the situation given to him by Cavusoglu, adding, however, that could not prejudge future decisions.

"After evaluating the situation based on the objective criteria, Turkey should be listed within the safe and secure countries," said Cavusoglu. 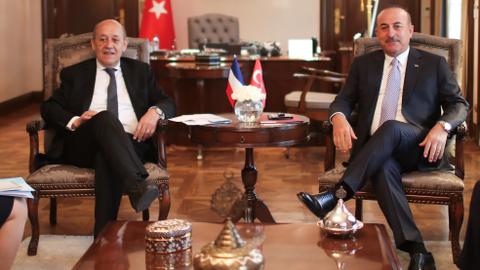