Two-day conclave of the Islamic bloc ends in Pakistan with a pledge to "protect" common interests of the Muslim world and support "just" causes of Palestine and Kashmir.

India has rejected Chinese Foreign Minister Wang Yi's remarks over Kashmir at a summit of the Islamic bloc, saying Beijing has "no locus standi [a right to be heard] to comment" on the disputed Himalayan territory.

China stands ready to work with Islamic countries "to promote multipolarity in the world," the Chinese top diplomat said on Tuesday during a meeting of the Organisation of Islamic Cooperation (OIC) in Pakistan.

"On Kashmir, we have heard again today the calls of many of our Islamic friends. And China shares the same hope," Wang said.

"China and the Islamic world have found a path of friendly coexistence and win-win cooperation between different civilisations, which serves as a model for a new form of diplomatic ties," Wang said.

New Delhi reacted angrily on Wednesday, saying, "Matters related to the Union Territory of Jammu & Kashmir are entirely the internal affairs of India. Other countries including China have no locus standi to comment. They should note that India refrains from the public judgment of their internal issues."

Pakistan had invited Wang as a special guest to the two-day summit. In 2019, UAE invited then Indian FM Sushma Swaraj as a "guest of honour" at the OIC conclave in Abu Dhabi, marking India's first high-level presence at the Islamic bloc summit.

Kashmir is divided between Pakistan and India. Both nuclear archrivals claim it in its entirety. China also controls a portion of the region called Aksai Chin which New Delhi claims to be a part of the India-controlled Ladakh province.

Rebels in the Indian-administered portion of Kashmir have been fighting New Delhi's rule over the region since 1989. Most Muslim Kashmiris support the rebel goal of uniting the territory, either under Pakistani rule or as an independent country.

In 2019, New Delhi stripped India-administered Kashmir’s semi-autonomy and annexed the region, sparking tensions with both Islamabad and Beijing.

India is also facing a two-year-old standoff with China in eastern Ladakh over a territorial dispute, with tens of thousands of soldiers within shooting distance. Twenty Indian soldiers and four Chinese soldiers died in a clash in 2020.

Wang will make a surprise stop for talks in New Delhi on Friday, an Indian official told Reuters news agency, though neither side has formally announced what would be the highest-level visit since border clashes soured their relations.

He further said that the support of the Organization is an expression of the full solidarity of the Muslim world with the people of #Kashmir in its struggle for self-determination. #OIC48CFM #OICInPakistan

Meanwhile, the two-day summit of foreign ministers of the OIC ended on Wednesday with a resolve to "promote and protect" the common interests of the Muslim world, and support the "just" causes of Palestine and Kashmir.

The 48th OIC summit was attended by foreign ministers and delegates from 57 Muslim-majority countries and observer states.

In a joint declaration, the participants rejected terrorism in all "forms and manifestations" and attempts to attribute it to any country, religion, nationality, race or civilisation.

"The declaration contents are inspired by noble Islamic values and ideals enshrined in the OIC Charter; they are anchored in the principles and purposes of UN Charter," said a statement by the Pakistani Foreign Ministry.

The statement added: "The Declaration articulates the resolve of the OIC member states to support the just causes such as Palestine, Kashmir and others."

It vowed to unify efforts to address the common challenges faced by the Muslim world and to uphold the "rights and interests" of Muslim minorities in non-OIC countries.

“We have failed both the Palestinians and the people of Kashmir.”

The declaration welcomed the unanimous decision of the UN General Assembly to proclaim March 15 as International Day to Combat Islamophobia as well as the Islamabad summit's decision to appoint a special envoy in this regard.

Rejecting terrorism, it reiterated the OIC's strong position against attempts to equate the legitimate struggle of people for self-determination with terrorism.

The declaration welcomed the operationalisation of the Afghanistan Humanitarian Trust Fund, which was signed in March 2022 in Islamabad.

In his address to the OIC foreign ministers' summit on Tuesday, Pakistani Prime Minister Imran Khan suggested that China, together with the OIC, should play a mediatory role to stop the ongoing conflict between Russia and Ukraine.

"I met with Chinese Foreign Minister (Wang Yi) today and discussed this (proposal). They (China) are ready to throw their weight behind our proposal," Qureshi said while addressing a news conference along with OIC Secretary General Hissein Brahim Taha in Islamabad.

"We have discussed this issue with Bahrain and Saudi Arabia as well," he said without elaborating on the response of the two Gulf states.

"I will visit China within the next few days. We will further discuss this issue there," he added. 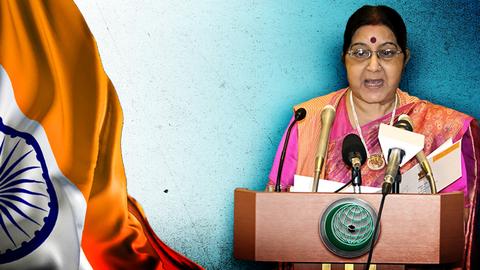