Black Friday is expected to be the largest shopping day of a holiday season used to gauge the US economy's health. Adobe Analytics predicts a loss of $1 billion in online revenue from this shopping season which is six fewer days than last year.

Black Friday once again kicks off the start of the US holiday shopping season. But with six fewer days than last year, it will be the shortest season since 2013 because Thanksgiving fell on the fourth Thursday in November – the latest possible date it could be.

Adobe Analytics predicts a loss of $1 billion in online revenue from a shortened season. Still, it expects online sales will reach $143.7 billion, up 14.1 percent from last year's holiday season

The National Retail Federation (NRF), the nation's largest retail trade group, baked the shorter season into its forecast, but it says the real drivers will be the job market. It forecasts that holiday sales will rise between 3.8 percent and 4.2 percent, an increase from the disappointing 2.1 percent growth seen in the November and December 2018 period that came well short of the group's prediction.

Last year's holiday sales were hurt by turmoil over the White House trade policy with China and a delay in data collection by nearly a month because of a government shutdown. This year's holiday forecast is above the average holiday sales growth of 3.7 percent over the previous five years.

NRF expects online and other non-store sales, which are included in the total, to increase between 11 percent and 14 percent, for the holiday period.

The 2019 holiday season will be a good measure of the US economy's health. Many retail CEOs describe their customers has financially healthy, citing moderate wage growth and an unemployment rate hovering near a 50-year low.

Workers at Amazon distribution centres in Germany have gone on strike for better pay on Black Friday.

Union ver.di said on Friday that the walkouts began overnight at six distribution centres across the country, with some due to last until Tuesday.

Union representative Orhan Akman said Amazon staff want to send a signal that their work can’t be bought with the kind of extreme discounts Amazon offers around this time of the year. 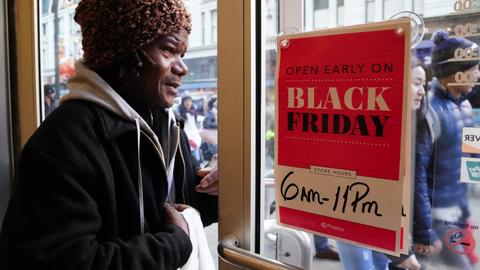