Transport chaos takes grip in Europe with flights grounded at airports in France and Germany as staff walk out over pay disputes. German and French unions demand a six percent pay rise for workers.

"The impact on Air France operating income of the seven days of strike between February 22 and April 11, 2018 is estimated around 170 million euros," the group said.

The estimate was contained in a statement on the passenger numbers of Air France-KLM, which said they had increased by 5.4 percent in March.

The walkouts were set to continue on Tuesday and Wednesday for a total of seven days since the strikes began in February.

The industrial action at Air France, where the French government owns a minority stake, coincides with rolling strikes by workers at the state rail operator SNCF, as well as protests by students, public servants, energy workers and rubbish collectors.

TRT World's Lucy Taylor has the latest from Paris.

The SNCF said on Monday that the strikes against plans to overhaul the debt-laden company had already cost it around 100 million euros.

Although the various protests have different aims, they have created a general atmosphere of social discontent as President Emmanuel Macron pursues his ambitious reform drive.

In the neighbouring country of France, thousands of passengers at four German airports, including the biggest hub Frankfurt, were also stranded on Tuesday as ground staff and other public sector workers staged walkouts across the country to increase the pressure in a pay dispute.

Lufthansa said on Monday it was cancelling more than 800 of its planned 1,600 flights on Tuesday and Frankfurt airport operator Fraport has warned of disruption.

TRT World's Ira Spitzer has the latest from Berlin.

"We expect an offer to be made for the third round of talks that is worthy of discussion so we can reach a good solution."

He said the union would escalate the dispute if employers did not present an offer next week. The third round of talks start on April 15.

Verdi has called for a 6 percent pay rise for its 2.3 million public sector employees at the federal and local level.

Germany's federal government and municipalities have rejected that, saying such an increase would force them to outsource jobs. 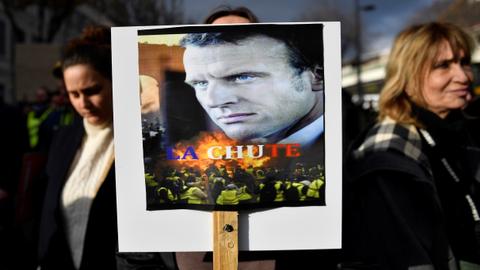