The 104-year-old Australian scientist who travelled to Switzerland received 15g of Nembutal even as Beethoven's 9th Symphony accompanied the former ecologist as he drifted into final sleep.

A 104-year-old Australian scientist who travelled to Switzerland to end his life committed assisted suicide on Thursday, the foundation which helped him die said.

Philipp Nitschke, director of Exit International, said David Goodall was declared dead at 12:30 pm (11:30 GMT) on Thursday from an infusion of Nembutal, a barbiturate.

Goodall "died peacefully" in Basel, tweeted Nitschke, of Exit International, the organisation which helped Goodall take his own life.

At 12.30 today (10th May) Professor David Goodall, 104 years of age, died peacefully at Life Cycle, Basel, Switzerland from an infusion of Nembutal.

Goodall died after receiving 15g of Nembutal, a barbiturate, via an injection which he slowly administered to himself.

Beethoven's 9th Symphony accompanied the former ecologist as he drifted into sleep.

Contemplating to end life for 20 years

He travelled to Switzerland to take advantage of the country's assisted-suicide laws.

Goodall, who had been barred from seeking help to end his life in his home country, did not have a terminal illness.

The British-born scientist, described by Exit International as its first member, said this week that he had been contemplating the idea of suicide for about 20 years, but only started thinking about it for himself after his quality of life deteriorated over the last year.

Goodall was born in London in 1914 and moved in 1948 to Australia, where he was a lecturer at the University of Melbourne.

An expert in arid shrublands, he also worked in Britain and held academic posts at US universities. 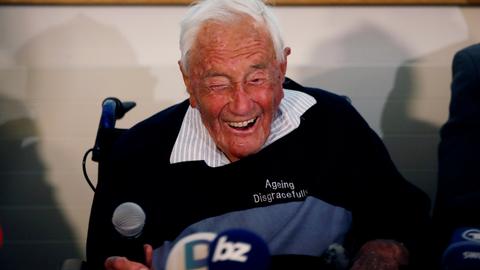 Australian scientist plans to kill himself with 'Swiss option'