The "Eye for an Eye" drink refers to an injury suffered by a medic while the "tear gas" eggs aim to bring to light police brutality towards pro-democracy demonstrators.

Pro-democracy protests that have roiled Hong Kong for more than three months are providing culinary inspiration for a restaurant that offers a themed menu with spicy wasabi-spiked "tear gas" eggs and a drink shaped like a bloodied eyeball.

The drink, which refers to a gruesome injury suffered by a medic is on offer along with an "Eye for an Eye" mocktail, featuring a round rubbery longan fruit punctured by strawberry syrup, at the Chinese-ruled city's Spicy Andong restaurant.

Owner Roy Ma said he was spurred to create the menu, which also offers "beating raw pork", a take-off on accusations of police brutality against protesters, after violent clashes at the end of August.

"I hope people will not forget what happened," Ma said. "No matter what is the future of Hong Kong, whether the protesters’ demands are fulfilled, I hope people don’t forget."

Since June, the former British colony has been rocked by sometimes violent street protests demanding that the government withdraw a controversial bill that would allow extradition to China for trial in courts controlled by the Communist Party.

While the extradition bill has since been dropped, in recent weeks protesters have thrown petrol bombs at police, lit fires on the streets, and stormed government buildings.

Police in the Asian financial hub have responded with tear gas, water cannon and rubber bullets.

"When we eat this meal, each course represents what has happened in the past few months," said Ruby Lam, a 21-year-old student eating at Ma's restaurant in the city's bustling Mongkok district, taking a bite of her "beating raw pork".

Sipping a red "Eye for an Eye", fellow diner Corinna Kwan said the drink was both a sentimental reminder of the incident and "really delicious".

Hong Kong returned to China in 1997 under a "one country, two systems" formula that ensures freedoms not enjoyed on the mainland, including the right of assembly and an independent judiciary.

Demonstrators are angry about what they see as creeping interference by Beijing, despite the promise of autonomy and the protests have broadened into calls for universal suffrage.

China says it is committed to the "one country, two systems" arrangement and denies interfering. It has accused foreign powers, particularly the United States and Britain, of fomenting the unrest.

Ma said his menu paid tribute to a pivotal moment in Hong Kong's history, although some had warned him against poking fun at the violence.

For $17, his "full gear" menu - a nod to the equipment, including gas masks and shields, some frontline protesters carried - also features "Five Demands" rice balls, named for the changes sought by the protests. 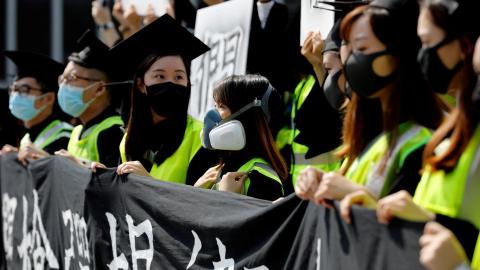 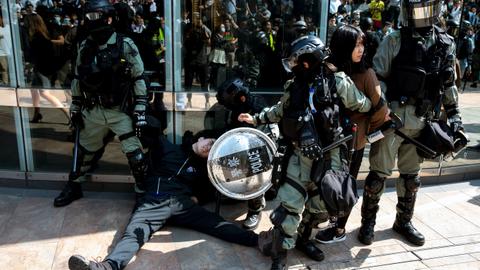 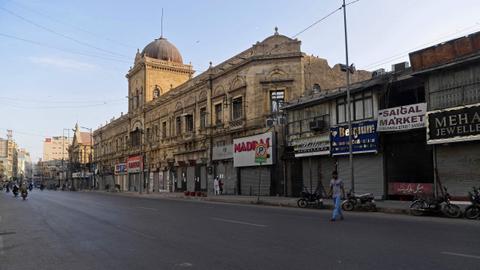 Lockdown imposed in Pakistan ahead of Ramadan – latest updates