The Norwegian Nobel Committee said the Nobel Peace Prize to Aung San Suu Kyi will not be withdrawn in the light of a United Nations report that said Myanmar's military carried out mass killings of Muslim Rohingya.

Norway's Nobel Institute said on Wednesday it had no intention of withdrawing its Peace Prize from Myanmar's Aung San Suu Kyi after a damning UN report termed the treatment of the Rohingya people a "genocide."

"There is no question of the Nobel Committee withdrawing the peace prize," director Olav Njolstad said.

"The rules of the Nobel Peace Prize do not allow it," he added.

A UN probe released on Monday detailed evidence of genocide and crimes against humanity "perpetrated on a massive scale" against the Rohingya, including acts of rape, sexual violence and mass killings.

At a UN Security Council session on Tuesday, a number of countries — including the United States, Britain, France and Sweden — called for Myanmar's military leaders to be held accountable.

The Myanmar government has bluntly rejected the UN's findings.

Suu Kyi won the Nobel Peace Prize in 1991 when she was detained by the military for championing democracy and human rights.

She was only allowed to leave Myanmar to receive the award 21 years later as the military apparently eased its iron grip on the country.

As the Rohingya crisis has deepened in the past year with the flight of hundreds of thousands to neighbouring Bangladesh, Suu Kyi has come under increasing international pressure to speak out about their plight.

So far however, she has said very little and steadfastly avoided any critical comment of Myanmar's military.

The Nobel Peace Prize committee had warned last year about the worsening situation in Myanmar and had urged all parties to do "everything possible to end discrimination against and persecution of minorities."

Njolstad repeated that statement, adding, "This call is not any less timely after the UN report." 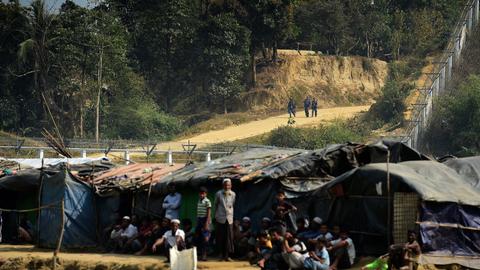