Hundreds of dead manatees have been found in Florida waters, a situation that could be classed as an 'unusual mortality event.'

US authorities are investigating an alarming increase in manatee deaths in Florida, after the bodies of more than 500 of the giant marine mammals have been found so far this year – 349 more than died in all of 2020.

Nearly 540 dead manatees were found in Florida waters just between January 1 and March 19, according to the Florida Fish and Wildlife Conservation Commission (FWC).

That is almost as many manatee deaths as were counted in the last three years combined. About 175 manatees usually die in Florida every year.

The FWC said in a statement on Wednesday that the situation could now be classed as an unusual mortality event (UME).

"Preliminary information indicates that a reduction in food availability is a contributing factor," the commission's statement said.

According to the National Oceanic and Atmospheric Administration, a UME is defined as event that "involves a significant die-off of any marine mammal population; and demands immediate response," in accordance with the Marine Mammal Protection Act.

"The FWC will continue to coordinate closely with our federal partners, participate in the investigative team and conduct analyses into the cause of the UME," the agency said.

Many of these "sea cows," as they are sometimes known thanks to their size and docile nature, have been found in a state of malnourishment along the central and southern stretch of Florida's Atlantic coast.

READ MORE: In Pictures: Some of the world's most critically endangered animals

"While the investigation is ongoing, initial assessments indicate the high number of emaciated manatees is likely due to a decline in food availability," the FWC said. "Seagrass and macro algae coverage in this region and specifically in the Indian River Lagoon has declined significantly."

Water pollution can cause an excess of algae blooms, which then impede the sun from being able to reach the seagrass the manatees eat – the plants die and the animals lose a food source.

In cold winter months, manatees are known to congregate in large numbers in the shallow waters of rivers and deltas, looking for warmer temperatures. They depend on seagrass to survive during this time.

"This event, as best we can determine, is an isolated case. We can't with confidence say that the whole manatee population is at risk," said Larry Killmar, chief zoological officer at ZooTampa at Lowry Park on Florida's west coast, home to a manatee critical care centre.

"We need the science to tell us what is going on," he said.

Manatees were re-classified from an endangered species to a threatened species in May 2017, early in former president Donald Trump's term.

The change reduced the level of protection the mammals were entitled to. 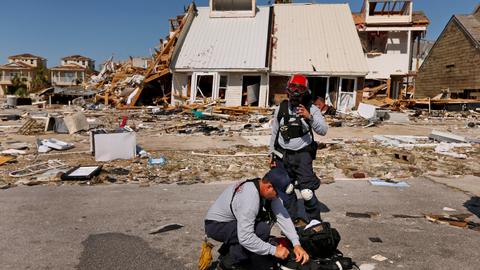