The project has become a battleground between two opposite sides of Hungary's political spectrum.

The National Election Committee in Hungary approved the plan to hold a referendum over the controversial construction of China’s university project in the country.

The proposition was made by the mayor of the capital city Budapest, Gergely Karacsony, a prominent opposition member against  Prime Minister Viktor Orban’s authoritarian rule

A drive to collect 200,000 signatures is required to trigger the referendum process which will begin next month.

Hungarians would vote whether they wish to repeal a law adopted earlier this year by parliament, which is dominated by Orban's right-wing Fidesz party,  that gave a green light to the construction of China’s Fudan University.

However, the proposed plan has become the latest battleground in Hungary’s increasingly polarised politics; one side is the right-wing Prime Minister Orban who is hostile to the EU’s liberal values and the US, aiming to strengthen ties with China and on the other side, liberal opposition sees Hungary as a part of liberal Europe.

According to a deal signed between the government and the Shanghai-based university, the campus, the first of its kind in Europe, would be a 500,000 sq metre complex.

Orban argues that a prestigious outpost of Fudan university would permit thousands of Hungarian and international students to acquire high-quality qualifications and contribute to the country’s economy.

But the complex, planned for completion by 2024, has sparked popular protests and fierce criticism from the opposition.

The major point for the critics is the cost of the project which is reportedly more than the entire budget of the country’s education system.

According to project documents published by the Hungarian investigative journalism site Direkt36.hu most of the Fudan project's estimated €1.5bn costs would also be covered by a Chinese loan to Hungary of 1.3 billion euros.

The opposition argues that taxpayers will have to bear the huge cost, claiming it would serve the interest of China’s Communist Party.

There are also claims that the land which has been allocated for the project was initially spared for building affordable housing for as many as 10,000 Hungarian students.

The poll conducted by the think tank Republikon Institute shows two-thirds of Hungarians oppose the project.

Putting aside their differences, the opposition parties gathered in a joint letter to Chinese President Xi Jinping to say that, if they are elected in next year’s elections, they would “immediately halt” the project as well another Chinese railway link project between Budapest and the Serbian capital city Belgrade.

In a joint letter to Chinese President Xi Jinping on June 22, the opposition leaders said that, if elected next year, they would "immediately halt" the university project and another planned Beijing-backed railway link between Budapest and Belgrade.

The railway project, which includes a 20-year $1.9 billion loan deal, has also been criticised for lack of transparency in agreements with China.

At first glance, the mega-deals seem to be in contrast to Orban’s image of the defender of Hungarian sovereignty and moral values. But it is a part of Orban’s “Eastern Opening” policy in which he has sought to distance himself from the US, EU and cultivate ties with China.

However, the ties with Beijing have impacted Hungary’s stance in the EU’s decision-making mechanisms. Budapest was the only member state to block an EU statement that condemned China’s tightened grip on Hong Kong and was the first EU country to approve China-made vaccines.

The Budapest mayor who aims to challenge Orban at an election early next year also accuses Orban of steering Hungary away from the European Union toward eastern powerhouses like China.

In June Karacsony, who won the Budapest mayoralty in 2019, renamed streets around the campus site to "Free Hong Kong road" and "Uyghur Martyrs' road" to highlight China’s human rights violations.

However, Orban’s 11-year rule might face a tough race in next year’s elections. In a rare move, six opposition parties including the green party Dialogue for Hungary and far-right party Jobbik decided to run together against Orban’s Fidesz party.

Although the opposition coalition hasn’t announced its candidate, the pro-European Union mayor Karacsony is seen as a frontrunner. 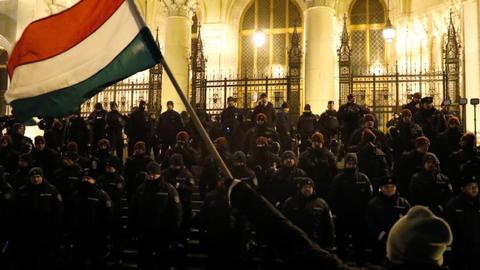