Zverev ends Djokovic's Golden Slam hopes with comeback win at Olympics and US swimmer accuses Russia's Rylov of doping in Olympics row. Here is the latest from Tokyo 2020:

Novak Djokovic's bid for a calendar Golden Grand Slam has been dramatically ended by Alexander Zverev in the Olympics men's singles semi-finals.

The world number one collapsed from a set and a break ahead as German fourth seed Zverev won 1-6, 6-3, 6-1 on Friday to set up a Sunday final against Russian Karen Khachanov.

The 34-year-old Djokovic has never won the Olympic singles title.

The Serbian star had already captured the Australian Open, French Open and Wimbledon trophies this year and needed Olympic gold and the US Open crown to emulate Steffi Graf, who achieved the feat in 1988, by winning the Golden Slam.

But his attempt to make history came to a close as Zverev powered 30 winners past the usually impregnable Djokovic in a stunning display.

It was yet more heartbreak for the 20-time Grand Slam champion at the Olympics, where his best result is a bronze medal in 2008.

He lost to eventual winner Andy Murray in the semi-finals in London nine years ago and was in tears after a first-round exit to Juan Martin del Potro at the 2016 Rio Games.

Zverev is looking to become the first German to win singles gold since Graf in Seoul after winning 10 of the last 11 games against Djokovic.

US swimmer accuses Russia's Rylov of doping in Olympics row

American swimmer Ryan Murphy accused Evgeny Rylov of doping after he was beaten by the Russian in the Olympic 200m backstroke on Friday, sparking an angry denial from Moscow.

Murphy raised doubts about the result when he claimed he was "swimming in a race that's probably not clean".

Rylov said he was "surprised" by Murphy's "strange" suggestion.

In an explosive statement on Twitter, the Russian Olympic Committee (ROC) said "the broken record is once again playing the song about Russia doping and someone is diligently pressing the button on the English-language propaganda".

The Russian Anti-Doping Agency said Rylov had been tested three times this year and that he was "prepared and clean."

Murphy had to settle for silver after being beaten for a second time this week by the 24-year-old Rylov, who set an Olympic record of 1min 53.27sec.

It was the Russian's second gold after he won the 100m backstroke on Tuesday.

READ MORE: Simone Biles pulls out of another Olympics event over mental health

The two pairs had met 15 times before the Tokyo final, with Zheng and Huang – twice world champions and the number-one ranked team – winning on 13 occasions.

"My mind went blank after the final point -- it still hasn't sunk in yet," said Wang.

"I had to tell myself, 'if you want to win this gold medal, first you have to win over yourself'."

The victory gave China its fourth Olympic gold in mixed doubles, putting the nation back on top after Indonesia's Tontowi Ahmad and Liliyana Natsir had won the title at the 2016 Rio Games.

Rory McIlroy thundered into contention as world number five Xander Schauffele shot 63 to grab the clubhouse lead before weather halted play for a second time on Friday at the Olympic golf tournament.

American Schauffele shot an eight-under par round to lead at 11-under, a shot clear of Mexico's Carlos Ortiz (67), when play was stopped because of a severe storm with six groups still yet to finish.

Japan home favourite and US Masters champion Hideki Matsuyama shook off the mental fatigue he suffered Thursday in his first tournament for six weeks since contracting coronavirus, and was eight-under with two holes to play, having picked up six birdies.

McIlroy, without a cap with no sponsor to please, took off with a brilliant birdie-birdie-eagle run from the sixth hole. 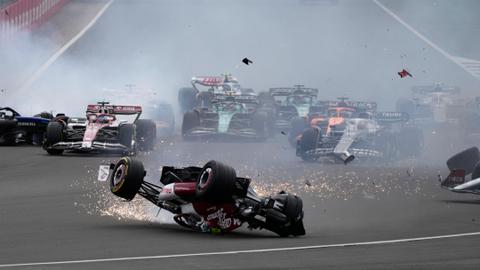