Body of White Helmets’ founder to be flown to London

The body of former MI6 officer Le Mesurier, 48, was found dead in the street in Beyoglu district of Istanbul in the early hours of Monday by passersby who were going to the mosque for the morning prayer.

Turkey's news agency says the body of a former British officer who helped found the White Helmets volunteer group in Syria, has been transferred to Istanbul's main airport to be flown to London, following an autopsy.

Le Mesurier was found dead outside his home in Istanbul on November 11. Police believe he fell to his death and are investigating the circumstances.

Turkey's Forensic Medicine Institute said toxicology and other examinations were continuing, adding that a report into his death would be sent to prosecutors "as soon as possible."

Le Mesurier was thinking of committing suicide 15 days before his death, wife of the former British intelligence officer told police in her statement.

Sweden citizen Emma Hedvig Christina Winberg, 39, told police officers on Monday that her husband had recently started to take psychiatric medications and told her 15 days before his death that he thought of killing himself.

According to Winberg, Le Mesurier took sleeping pills on the day of the incident and she was sleeping when the incident took place early in the morning. She also said no foreigner came to the house before the incident.

The police and paramedics arrived at the scene soon after they got the call and initially found nothing in his possession to identify the man, who was later found to be Le Mesurier.

Winberg said that they moved to the house in Beyoglu after Le Mesurier had started to get an injection and drug treatment due to stress disorder as they needed to stay close to a health institution.

Till a few days before the incident, they were residing in a house in Istanbul’s Prince Islands, Winberg said.

“We met an old friend in the evening. We came home at around 7 pm local time [GMT1600] and did not go out after then,” she stated.

Winberg said her husband went to sleep at around 2 am after taking a sleeping pill, while she went to sleep two and a half hours after him.

Le Mesurier woke up when she entered the room, the wife said, and asked her if she wanted a sleeping pill as well to which she replied yes.

Winberg said she checked on her husband after not seeing him in the bed.

"I looked down from the window which was open at the third floor and saw him laying down on the ground," she added. 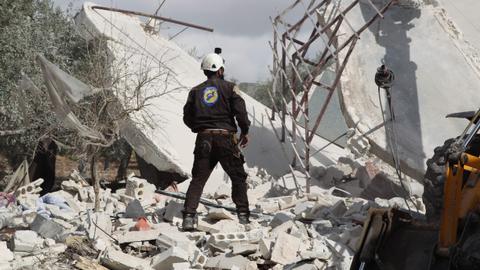