"If they have their iPhones, the others have their Samsung [phones]. In our country, we have Venus and Vestel," says Turkish President Erdogan while announcing boycott of US electronic goods amid an ongoing rift between the two NATO allies.

The announcement came during his address to a symposium organised by the Foundation for Political, Economic and Social Research (SETA) on the 17th anniversary of the founding of the governing Justice and Development (AK) Party.

“We will boycott American electronic products,” Erdogan said, adding that Turkey would produce a better version of every product previously bought with foreign currencies and export them.

“If they have their iPhones, the others have their Samsung [phones]. In our country, we have Venus and Vestel. We will produce what we don’t already have ... and we will export them,” Erdogan said.

“They do not hesitate to use the economy as a weapon against us, as they [also] tried in the diplomatic or military field and efforts to sow social and political instability,” he added.

Last week, US President Donald Trump ramped up his attack on Turkey by raising US tariffs on Turkish aluminium and steel imports to 20 percent and 50 percent, respectively.

Erdogan on Monday said, “Turkey’s economic dynamics are solid, strong and intact, and they will continue to be intact.”

He said there was no basis for the recent exchange rates development.

TRT World's Andrew Hopkins speaks from the conference in Ankara.

“Turkey is under siege in the economy, as in other areas," Erdogan said.

'Be a faithful friend and ally'

Opening the conference of ambassadors Turkey's foreign minister called on the US to be a "faithful friend and NATO ally."

“We expect the US to be faithful to our traditional friendly relations and NATO alliance,” Mevlut Cavusoglu said in his opening speech at the 10th Ambassadors’ Conference in the capital Ankara.

The five-day conference hosts 249 Turkish ambassadors and two charge d'affairs, as well as a number of foreign diplomats.

He also noted that Turkey is the “most reliable” and “best destination to invest,” despite the negative propaganda and the tough challenges.

On the recent tension between Turkey and the US, Cavusoglu said, “Recently, our relations with the US have unfortunately come to a point we did not desire.”

He added that Turkey would continue its "constructive engagement."

“We are open to diplomacy and consensus, but it is not possible to accept any imposition,” Cavusoglu said.

Saying that the US is going through a “strategic confusion” due to its domestic politics, Cavusoglu called its NATO ally to realise "each of us matters."

Relations between the countries soured after Trump threatened to impose sanctions on Turkey over American pastor Andrew Craig Brunson, who was arrested in the Aegean province of Izmir in December 2016.

Brunson was charged with committing crimes, including spying for the PKK – listed as a terrorist group by both the US and Turkey – and the Fetullah Terrorist Organisation (FETO), the group behind the defeated coup attempt of July 2016.

Turkish prosecutors are seeking 15 years in prison for Brunson for committing crimes on behalf of terrorist groups without being a member, with up to 20 years for political or military espionage.

Erdogan gave assurances that the exchange rates would return to "reasonable levels soon." He called on the Turkish ambassadors to continue working in "a spirit of mobilisation" and urged them to work more efficiently and in a much more result-oriented way in the new period.

Meanwhile, at the White House in Washington, US National Security Adviser John Bolton met Serdar Kilic, Turkey’s ambassador to the US.

According to a statement released by White House Press Secretary Sarah Sanders, the meeting focused on Brunson.

"They discussed Turkey’s continued detention of Pastor Andrew Brunson and the state of the US-Turkey relationship," said the statement. 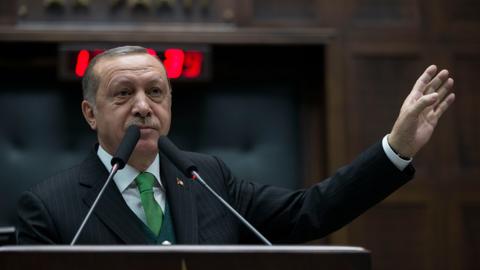 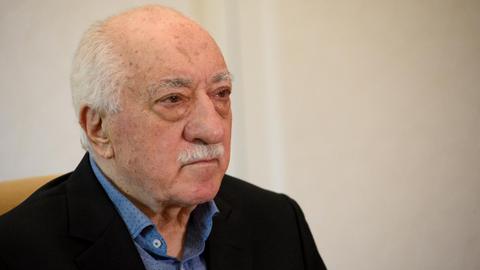 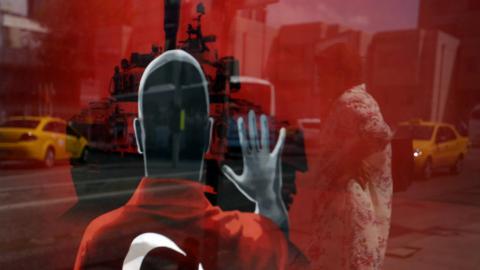