Turkey's President Recep Tayyip Erdogan says the project is necessary for the safety of Istanbul amid growing ship traffic through the Bosphorus, one of the busiest maritime passages in the world.

Canal Istanbul will turn a historic "new page" in Turkey’s development, the nation’s president has said at a groundbreaking ceremony for the mega-project’s first bridge.

Threats to the Bosphorus and Istanbul from growing maritime commerce made Canal Istanbul a necessity, said Recep Tayyip Erdogan on Saturday, praising the project he has called his “dream.”

Stressing that the number of ships going through the Strait of Istanbul annually has jumped from 3,000 in the 1930s to 45,000 today, the president said projections foresee up to 78,000 ships possibly making the journey by 2050, with each large ship posing a serious risk to Istanbul.

Erdogan has touted the project, offering an alternate route connecting the Sea of Marmara to the Black Sea, as necessary for the safety of Istanbul amid growing ship traffic through the Bosphorus, one of the busiest maritime passages in the world.

“Canal Istanbul is an essential project to protect the historical and cultural fabric of the Bosphorus strait,” he said, adding: “We consider Canal Istanbul a project to save the future of Istanbul.”

The project is expected to be built under public-private cooperation. At the meeting where Erdogan announced the project, he said it would be financed entirely through national resources.

Following a tender process, the project is expected to be completed in six years, with around one-and-half-years preparatory work and five-and-half years of construction.

Six bridges will be built over the canal, transforming Istanbul into a city with two seas.

Cities boasting some 250,000 residences are planned to be built on both sides of the canal.

The mega-project, meant to prevent risks posed by vessels carrying dangerous shipments through the Bosphorus Strait, was approved by the country's Environment and Urbanization Ministry. 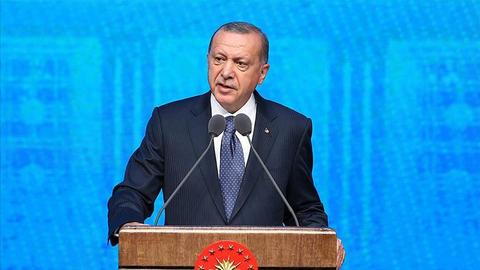