Turkey's president has asked the US to "revise the decision" of charging former economy minister Zafer Caglayan who is accused of conspiring to violate Washington's sanctions on Iran.

Turkish President Recep Tayyip Erdogan on Friday criticised charges announced by US prosecutors against a Turkish former economy minister for conspiring to violate US sanctions on Iran as politically motivated and called on Washington to review the move.

Former economy minister Zafer Caglayan is charged along with former Halkbank general manager Suleyman Aslan and two others for evading US sanctions against Iran.

“I told Obama and his administration that we won’t be part of the sanctions against Iran," Erdogan said.

"We have bilateral and crucial relations with them, and part of our petrol and natural gas purchases come from Iran. Naturally, our economy minister is one of the people who dealt with these purchases," the Turkish president added.

"These steps are purely political," he told reporters before leaving Istanbul for Kazakhstan.

"The United States needs to revise this decision, there are very peculiar smells coming from this issue."

"I hope we'll get a chance to discuss this issue in the United States," he added. 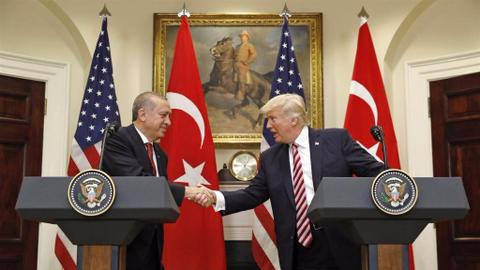