How Turkey-UK relations will evolve in the post-Brexit period

Turkey and the United Kingdom seek to boost cooperation on the economy and defence in the aftermath of Brexit while searching for solutions to war in Syria, irregular migration and security threats.

Turkey's President Recep Tayyip Erdogan met with Queen Elizabeth II and Prime Minister Theresa May on his three-day visit, which started on Sunday, and reviewing economic relations topped the agenda.

Erdogan's visit is part of May's charm offensive to shore up relations with countries outside the European Union (EU) as Britain prepares to leave the bloc and secure at least the promise of future trade deals to bolster her all but stalled Brexit plans.

Since the UK is set to leave the bloc in March 2019, ending its 44-year membership, it perceives trade and security cooperation as being at the heart of the strategic relationship between the UK and Turkey.

"The UK is a valued and trusted strategic partner for us. As Turkey, we are ready for more cooperation in every field of the post-Brexit era as well,” Erdogan said.

“The synergy which will occur when Turkey’s operational opportunities and the UK’s financial power come together will bring very big benefits to both sides.”

Here are the six key components of this partnership:

Turkey, enjoying a Customs Union deal with the EU, attaches importance to the developments in the aftermath of Brexit with respect to the new economic model that will be shaped between the EU and the UK.

May secured a commitment last year for Britain and Turkey to work on post-Brexit trade, and Erdogan said he was keen on securing a deal immediately after Britain leaves the EU.

The two leaders had agreed on the trade volume that could be increased to $20 billion annually, up from the 2017 level of around $16 billion, said Erdogan.

In 2017, the trade volume between the two countries stood at $16.2 billion, reaching to around $5 billion between January and March of this year.

There are currently 2,362 companies operating with a UK capital in Turkey, and UK’s direct investments to Turkey in 2011 had reached $917 million.

Cooperation on security and defence

Britain and Turkey signed a defence deal worth more than $135 million (£100 million) last year to develop Turkish fighter jets, paving the way to deeper cooperation over the lifetime of the project.

A report showed that Britain has sold more than $1billion worth of weapons to Ankara since the failed coup in July 2016.

It also includes a $135 million deal with the BAE Systems to fulfil Erdogan’s plan to build a Turkish-made fighter jet, it said.

The value of known UK export licences for military equipment sold to Turkey over the last three years for which data is available, between July 2013 and June 2016, was £466 million (around $610 million).

On defence cooperation, Erdogan called for the joint marketing of commonly developed and manufactured products to third countries.

Minister for Europe and the Americas Alan Duncan, was the first European official to visit Turkey and show support to Ankara nearly a week after the defeated coup in 2016.

War in Syria and operations

A solution in the Syrian conflict and foreign and security policy collaboration between both countries are essential for the stability of Europe and the Middle East, said the Foreign and Commonwealth Office.

The British military in April joined the United States and France in carrying out an attack on Syria to target its chemical weapons capability in retaliation for the April 7 suspected poison gas attack in Douma in eastern Ghouta.

The UK said Turkey is a vital military partner in the fight against Daesh, reinforced by the context of its NATO membership.

"Cooperation between Turkey and the UK in the fight against terrorism is at a much more advanced stage than mechanisms we have with other partners," Erdogan said.

The Foreign and Commonwealth Office said the PYD and the YPG have made an important contribution to counter-Daesh efforts while also admitting awareness of concerns over their links to the PKK.

The YPG is the Syrian branch of the PKK, which is recognised as a terrorist organisation by Turkey, the US and the EU.

The UK's Foreign Minister Johnson had posted a tweet saying "Turkey is right to want to keep its borders secure."

Watching developments in Afrin closely. Turkey is right to want to keep its borders secure. We share goal of reducing violence and keeping focus on most important task: a political process in Syria that leads to the end of the Asad regime.

Turkey currently hosts the highest number of refugees in the world: approximately 3.9 million people, including around 3.5 million Syrians, according to the UN figures.

In this sense, Turkey plays a crucial role in preventing irregular migration into the EU, despite the inadequate international support that it receives for doing so, said a House of Commons Foreign Affairs Committee report published in March 2017.

Two guarantors of Cyprus out of three

Turkey and the Greek Cypriot administration have been locked in a public dispute over overlapping claims of jurisdiction for offshore oil and gas research.

"The eastern Mediterranean region will face a sustained security threat if the Greek Cypriot side continues unilateral hydrocarbon-related operations there," Erdogan said on Monday.

The claims of right for hydrocarbons offshore have been a source of tension and a couple of times triggered the suspension of talks started in 2014 between the Greek south and Turkish north of the Island.

Diplomatic efforts to reunite Cyprus have failed since the island was riven in a 1974 Turkish military operation triggered by a coup by Greek Cypriots seeking union with Greece.

After consultations with Britain, which did not want to take joint action under the Treaty of Guarantee signed in 1960, Turkey intervened as a guarantor power on July 20, 1974.

Both Turkey and Greece were given the right to station military contingents on the island. Turkey, Britain and Greece sought to guarantee this state of affairs. As a result of the Cyprus Agreements, Britain retained sovereignty over two military bases.

Both countries seek the safety of visitors and citizens on British and Turkish soils as there are around 250,000 Turkish citizens living in the UK and 34,460 British citizens who own 26,730 properties in Turkey.

Turkey’s ambassador to the UK, Abdurrahman Bilgic last year said those citizens living in Britain on a business document linked to the September 1963 Ankara Agreement would not see a change in their status while the UK negotiates its departure from the bloc.

Thousands of Turkish people living in Britain on a permit created by a special 1963 treaty are being told their situation will be “business as usual” during Brexit.

But British Ambassador to Turkey Sir Dominick Chilcott on March said "the [British] court has decided that the process by which Turkish nationals were converting a 3-year business visa into permission to remain in the UK for as long as they liked was not provided for under the agreement."

"Firstly, this decision came into effect on 16 March and will not affect those people who applied prior to this date. Secondly, this decision is unrelated to Brexit, the UK’s future exit from the EU." 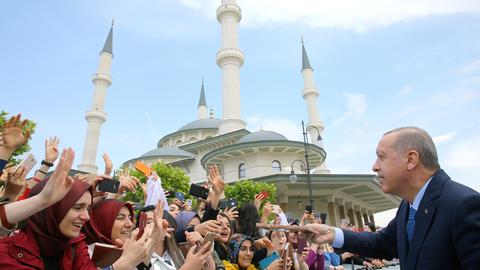