The $7.2 billion first stage of Istanbul's new airport is among a set of mega projects planned as part of a series of objectives for Turkey’s 2023 centennial.

Turkey is set to inaugurate the first phase of Istanbul's new airport, with leaders from across the world expected to take part in the grand opening on Monday.

The launch comes on the same day as the country celebrates Republic Day and the 95th anniversary of the founding of the Turkish Republic.

Located near the shores of the Black Sea, the maiden voyage from the airport will be to Turkey’s capital Ankara on October 31, with the first international flight heading to the Turkish Republic of Northern Cyprus the following day.

Built by a consortium of five contractors – Limak, Kolin, Cengiz, Mapa and Kalyon, which won a $29 billion tender in 2013 – the project has been carried out through a build-operate-transfer model.

One of the world's largest and most modern airports

On Monday, two runways - measuring 3,750 and 4,100 metres long - will go into service as a part of the first phase, including three separate airstrips.

It is expected that 2,000 planes will go through the airport every day by the end of the year, with more than 250 carriers flying to more than 350 destinations.

With the remaining phases to be completed by 2028, the airport will sport six separate runways with a capacity of 500 aircraft and an annual capacity of 150-250 million passengers.

Spread over an area of more than 76 million square metres, the first phase of the airport will serve 90 million passengers annually.

It will also be home to the world’s largest duty-free shopping complex. The 53,000 square-metre complex was built at a cost of $141 million (€120 million) and will consist of six sections, including luxury stores and bazaar concepts.

The third airport in the city will also be the world's biggest project built from scratch upon completion.

It also uses mobile applications and artificial intelligence for customers, is energy efficient and boasts a high-tech security system.

The new Istanbul airport is expected to boost the Turkish aviation sector's growth by 27.5 percent in the next three years.

It will provide more than $30.65 billion (€26 billion) of revenue to the government annually.

Data from Turkey's General Directorate of State Airports Authority (DHMI) forecasts more than 230 million air passengers next year and a rise of 27.5 percent, year-on-year, to reach nearly 250 million in 2020.

The largest increase will be seen in passengers on international flights - around 29 percent - to reach 107.7 million in 2020, compared with 83.5 million passengers last year.

Air traffic, including transit overflights in Turkish airspace is projected to reach over 2.5 million this year compared with 1.91 million in 2017.

After the launch of the new airport, the country’s national flag carrier Turkish Airlines will shift to the new airport by the end of this year, and the Ataturk Airport site will transition to other uses, such as training activities, aviation fairs, and civil use.

Turkish President Recep Tayyip Erdogan had also earlier announced that parts of the existing Ataturk Airport on the European side of Istanbul will be replaced by a huge park named the "People's Garden."

Meanwhile, Turkish Airlines and Emlak Konut, Turkey’s largest real estate investment company, have also inked an agreement on the construction of a new housing project near Istanbul’s third airport for the airline’s employees.

The project will be built on 350 hectares of land, located very close to Istanbul's new airport, a press release by the carrier's media relations said.

Within the scope of sustainability, the project aims to utilise renewable energy resources, rainwater and gray water recycling technology, according to the press release.

Speaking at the signing ceremony in May this year, Ilker Ayci, the airline's chairman, said a survey of 12,500 employees suggested that there was a need for a residential and living area near the new airport once it becomes home for the carrier's air fleet.

Turkish Airlines, founded in 1933 with a fleet of five aircraft, currently has nearly 330 aircraft, including passenger and cargo planes, and flies to more than 300 destinations worldwide.

For his part, Murat Kurum, general manager of Emlak Konut, said that 225,000 people will be employed directly or indirectly in this project.

"We are carrying out a significant partnership with Turkish Airlines by transferring 50 percent of approximately 3.6 million square metres of land which is owned by our company," he said.

The $7.2 billion (€6 billion) first stage of Istanbul's new airport, which was built in nearly three years through a public-private partnership model, is among a set of mega projects planned as part of a series of objectives for Turkey’s 2023 centennial.

President Erdogan in 2015 had said: “With the completion of all phases of this project, Turkey, especially Istanbul, will become a global center in the world’s air traffic.”

Meanwhile, the country has carried out other major projects such as the Canakkale 1915 Bridge, which will become the world’s longest suspension bridge.

Other projects that form part of Turkey's Vision 2023 include the 1,200 MegaWatt Akkuyu Nuclear Power Plant in Mersin, on the Mediterranean coast, an artificial sea-level waterway called the Canal Istanbul, which will be built parallel to the Bosphorus and will connect the Black Sea to the Sea of Marmara, the Trans-Anatolian Pipeline Project (TANAP) and the Turkish Stream, designed to carry natural gas from Azerbaijan’s Shah Deniz field to Turkey and beyond. 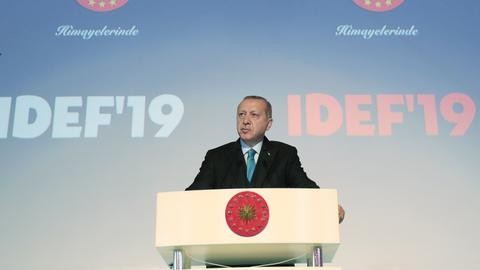