In a statement, the Elbubanna tribe said "We as the biggest tribe in Manbij support the patrolling of Turkish troops, which will play a major role in ensuring stability and security."

The largest tribe in the northern Syrian city of Manbij said on Tuesday it supports the Turkish troops patrolling the region and expects the US to fulfill its commitment.

In a statement, the Elbubanna tribe said, “We are following closely the implementation of the Manbij roadmap reached by Turkey and the US."

"We as the biggest tribe in Manbij support the patrolling of Turkish troops, which will play a major role in ensuring stability and security, on behalf of all our members inside and outside Manbij and on behalf of all free tribes."

“The US is required to fulfill its commitment to withdraw all YPG/PKK terrorists from Manbij to east of the Euphrates so that people who escaped from Manbij are able to return to their home."

"The US should establish a civilian government that manages the region by consolidating the whole community in Manbij, takes care of private property, and respects the freedom and traditions of the people."

The Manbij roadmap was announced after a June 4 meeting in Washington between Turkish Foreign Minister Mevlut Cavusoglu and US Secretary of State Mike Pompeo.

The deal focuses on the withdrawal of the PKK-affiliated YPG terror group from the northern Syrian city of Manbij and stability in the region.

Should the model prove a success, Turkey has said it would push for a similar arrangement in eastern Syria. 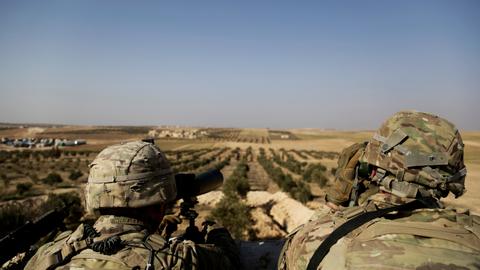