Patriot systems could be provided to Turkey for security - Hulusi Akar

Turkey’s Defence Minister Hulusi Akar said, “There is the threat of air strikes and missiles against our country; there could be Patriot support.”

Turkish Defence Minister Hulusi Akar said on Thursday that NATO members may send Patriot missile systems to Turkey to use for security in the face of the conflict in northwestern Syria's Idlib region.

Speaking in an interview with broadcaster CNN Turk, the Turkish defence minister said, "There is the threat of air strikes and missiles against our country; there could be Patriot support." But Akar ruled out any troop support from the US.

The biggest problem between Turkey and the US is Washington's support to the YPG/PKK terror group, Akar said.

The Turkish defence minister said that Turkey will activate the S-400 missile systems which it has bought from Russia and there should be "no doubt" about this.

Akar said Ankara and Moscow have "healthy dialogue" on the ground and did not seek to "face off" with Russia over growing tensions related to a Syrian regime offensive on Idlib.

He also added that Turkey and Russia are discussing the use of Syrian air space in Idlib and the problem can be overcome if Russia "steps aside."

What Turkey wants in Idlib is the Sochi agreement to be applied and refuses any revisal of the agreement, Akar said.

Akar said that the regime is branding "everyone who opposes it as a terrorist" and does not give them any right to live.

The minister said that Turkey seeks an immediate permanent ceasefire to stop refugee influx, and so "the people can be relieved."

"There is a military situation there, that is true, but beyond that, there is a humanitarian tragedy [ongoing].

"Millions of people are trying to survive in the cold of winter, in difficult climatic conditions. But the [Syrian] regime brutally targets [residential areas] including hospitals. Our demands and attitudes in this situation are clear."

Turkey has 12 observation posts on Idlib's border according to the Sochi memorandum of understanding signed between Ankara and Moscow in September 2018.

Responding to a question of whether Russians were asked to accept current map on Idlib, Akar said that Moscow has some suggestions on the matter but "we remind them of the Astana MoU's 5th article," which authorises parties to take additional measures in terms of reducing tension.

Akar said that Turkey will secure the ceasefire in Idlib even "using force" if necessary.

Turkey’s President Recep Tayyip Erdogan gave an ultimatum to Bashar al Assad's regime to pull his forces behind Turkish observation posts in Idlib by the end of February otherwise he said Ankara will do it by itself.

Questioned whether Turkey is ready for the operation in Idlib, Minister Akar recalled Erdogan’s instructions and said they have made their plans.

“We have made our A, B, C plans. This will be implemented at the right time.” 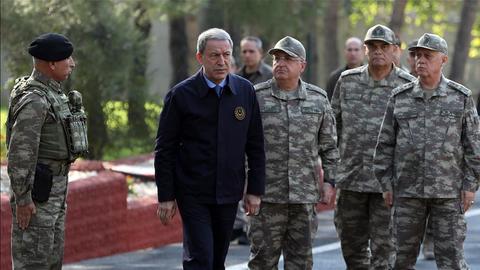