Turkey's president receives praise for being the only leader who has raised voice for the Muslims suffering in different countries.

Turkey's President Recep Tayyip Erdogan took the centre stage on Tuesday during the UN General Assembly session as he criticised world leaders for failing to resolve troubles in Palestine and Kashmir.

During his speech, Erdogan held an image of the time-lapsed map of Israel, which showed how the Israel had gobbled Palestinian territories over the decades.

"Where was Israel in 1947 and where is it now," he said as he displayed the map in which Palestinian land marked in green color could be seen taken over by Israel.

"Israel is still expanding and Palestine is still shrinking."

His speech drew immediate reaction on Twitter where #OurVoiceErdogan became one of the top ten globally trending hashtag with more than 330,000 tweets.

With The Oppressed Against The Oppressor, This Man Deserves To Be Called The Leader Of Muslim Ummah. Long Live Erdogan#OurVoiceErdogan pic.twitter.com/QEr2SIwbAv

His speech inevitably led to comparisons with leaders of the Arab world who have started to ignore Israeli aggression as they turn their fury towards Iran.

Even though only Egypt and Jordan have formal diplomatic relations with Israel, some countries such as the United Arab Emirates have hosted Israeli officials in recent months, indicating a shift in their policy.

Erdogan is already regarded as a hero by most Arabs/Muslims and sharing the ever-shrinking map of Palestine with the rest of the world at the #UNGA will solidify his position. The question is where are the #Arabs ??? https://t.co/tCB9UasnI8

Turkey is among the few countries, which have voiced concern about the situation in India-administered Kashmir where New Delhi has imposed a communication blackout after stripping the region of its constitutional autonomy last month.

"In order for the Kashmiri people to look at a safe future together with their Pakistani and Indian neighbours, it is imperative to solve the problem through dialogue and on the basis of justice and equity, but not through collision," said Erdogan.

The disputed Kashmir territoryis which  divided between Pakistan and India has long been a source of conflict between the two countries.

I thank Turkey’s President Erdogan for raising the issue of IOJK in the UN General Assembly & calling for a solution to this long-standing dispute. Referring to the siege of IOJK, he pointed out that despite UN resolutions, 8 million people are stuck in IOJK.

Erdogan has a huge following in Pakistan where Twitter overflowed with praise for the Turkish leader.

And when you mean what you say you sound like this. #OurVoiceErdogan https://t.co/dCcT6pTFwR

We are as a Pakistani nation, thankful to Erdogan and Turkey#OurVoiceErdogan pic.twitter.com/UnIWuAO4Ug 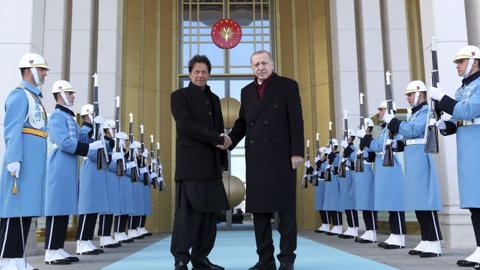