Turkish and Russian delegations will meet in Turkey’s coastal city of Izmir on Friday to discuss trade and economic relations.

The humble tomato is also expected to be on the table — and it’s playing an outsized role in the talks.

The two countries — sometimes friends, sometimes frenemies — managed to sign an arms deal last month, but had failed to solve the tomato crisis.

How did the tomato crisis break out?

Relations between the nations were strained since November 2015, when Turkey downed a Russian fighter jet after it violated Turkish airspace.

In response, Russia imposed a raft of sanctions on Turkey.

In August 2016, Turkish President Recep Tayyip Erdogan and Russian President Vladimir Putin came together for the first time since 2015.

Ties have since largely normalised. Russia lifted its embargo on the import of 20 agricultural products from Turkey, but the ban on tomato imports remained in place.

After his meeting with the Turkish president in Sochi, Putin said that Russia’s embargo on the import of tomatoes from Turkey and its visa restrictions on Turkish nationals will remain in force for the time being.

Russia’s embargo list included 21 agricultural products in total. The tomato was also among them.

Russia was Turkey’s biggest tomato importer and knew that any embargo on this could affect Turkey’s economy negatively.

How did this crisis affect Turkey? How did Ankara react?

The blowback was swift. Turkey’s Ministry of Agriculture last March imposed a 130 percent tariff on Russian wheat and other grains, in addition to sanctions on rice, peas and sunflower oil from Russia.

How was Russia affected?

The ban on Turkish tomato imports inspired Russia to become self-sufficient in tomato production, a windfall for companies who invested in the technology that would increase year-round production.

Greenhouse projects are being built with state support, and these are key to Russia's plans to become self-sufficient for its 144 million population by 2020, industry players, analysts and officials say.

Russia only imports about 500,000 tonnes of the 3.4 million tonnes of tomatoes consumed annually.

The country's notoriously harsh winters have limited its ability to ramp up to full capacity, IKAR agriculture consultancy said. Besides, growing tomatoes in Russian greenhouses is much more costly than buying them from Turkey.

Sergey Korolyov, the head of National Fruit and Vegetable Producers' Union, estimated that greenhouse projects that have already started growing tomatoes could start seeing their money back in 8 to 9 years thanks to state support, which includes partial investment compensation and favourable loan rates.

What is Turkey’s offer?

Ankara is asking Moscow to lift its tomato import ban at least during the winter months — between December and March — and keep it in place during other months, so that Russians can continue growing tomatoes during the greenhouse tomato period in Russia.

It is unclear if Russia will accept that, but Putin at least kept hopes alive, saying “We can’t forever keep our markets closed to Turkish tomatoes.” 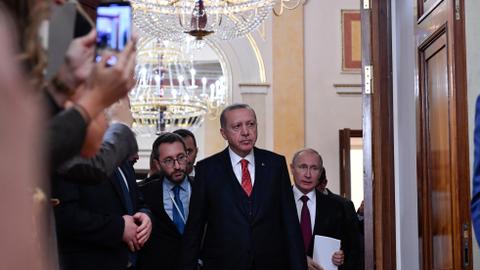 Efforts against terror groups will continue in Syria's Idlib - Erdogan