A senior official of Turkey’s governing AK party says Ankara will "never allow a cover-up" of the killing of Saudi journalist Jamal Khashoggi, after Riyadh conceded that Khashoggi died inside its Istanbul consulate.

Turkey will "never allow a cover-up" of the killing of Saudi journalist Jamal Khashoggi in Saudi Arabia's consulate in Istanbul, a senior official in Turkey's governing party said Saturday after Saudi Arabia announced hours earlier that the writer died during a "fistfight" in its consulate.

The critical reaction by Numan Kurtulmus, deputy head of the Justice and Development Party, suggested that Turkey, which started its own investigation amid media reports that a Saudi hit squad killed Khashoggi, was not prepared to go along with the Saudi version of what happened to the writer.

"It's not possible for the Saudi administration to wiggle itself out of this crime if it's confirmed," Kurtulmus said.

He also said that Turkey would share its evidence of Khashoggi's killing with the world and that a "conclusive result" of the investigation is close.

'Turkey will uncover whatever happened'

In separate remarks, governing Justice and Development (AK) Party spokesman Omer Celik said Turkey will get to the bottom of the killing of Saudi journalist Jamal Khashoggi.

"Turkey will uncover whatever happened. No one should have doubts about that," Celik told reporters in Istanbul.

Turkish President Recep Tayyip Erdogan is determined to solve the case by all means, Celik added.

The AK Party official said Turkey will not blame anyone prior to completion of the investigation, but nothing should be hidden.

Another Turkish governing party official also criticised Saudi Arabia, saying the kingdom should have given its explanation "before the situation reached this point."

Leyla Sahin Usta, a human rights official in the governing party, said it would have been "more valuable" if Saudi officials had earlier admitted that Khashoggi was killed in its diplomatic post.

Standing outside the Saudi consulate in Istanbul, the head of a media group said the "authority that gave the orders" in the killing of Khashoggi should be punished.

Turan Kislakci, president of the Turkish Arab Media Association, said Khashoggi was "slaughtered by bloody murderers" and that his group wants "true justice" for its slain colleague.

A change in tone

Saudi Arabia initially denied any knowledge of the disappearance of Khashoggi, who vanished after entering its consulate on October 2. But early Saturday, it admitted that he was killed there and said 18 Saudi suspects were in custody and intelligence officials had been fired.

The overnight announcements in Saudi state media came more than two weeks after Khashoggi, 59, entered the Saudi Consulate in Istanbul for paperwork required to marry his Turkish fiancée, and never came out. They also contradicted assertions in Turkish media leaks that Khashoggi was tortured, killed and dismembered inside the consulate, claims the kingdom had rejected as "baseless."

But growing international pressure and comments by US officials up to President Donald Trump forced the kingdom to acknowledge Khashoggi's death.

While it fired officials close to Crown Prince Mohammed bin Salman, Saudi Arabia stopped short of implicating the heir-apparent of the world's largest oil exporter. King Salman, his father, appointed him to lead a committee that will restructure the kingdom's intelligence services after Khashoggi's slaying.

No major decisions in Saudi Arabia are made outside of the ultraconservative kingdom's ruling Al Saud family.

The kingdom also offered a far different version of events than those given by Turkish officials, who have said an "assassination squad" from the kingdom including an official from Prince Mohammed's entourage and an "autopsy expert" flew in ahead of time and laid in wait for Khashoggi at the consulate. Beyond its statements attributed to anonymous officials, Saudi Arabia offered no evidence to support its claims.

Khashoggi, a prominent journalist and royal court insider for decades in Saudi Arabia, had written columns for The Washington Post critical of Prince Mohammed and the kingdom's direction while living in self-imposed exile in the US.

"God have mercy on you my love Jamal, and may you rest in Paradise," Khashoggi's fiancée, Hatice Cengiz, tweeted following the Saudi announcements. 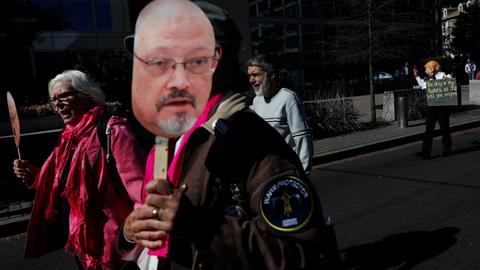 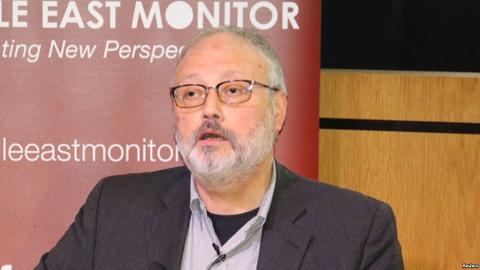